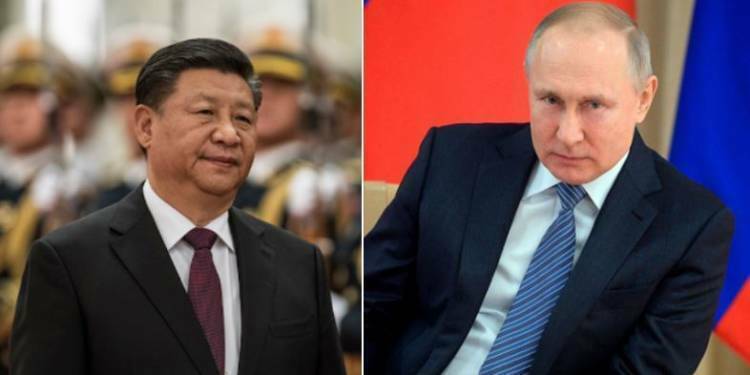 Who is China’s enemy? Well, almost everyone. And who is China’s friend? Well, the Chinese Communist Party (CCP) doesn’t believe in making friends. It uses other regimes to its own advantage and once it is done using those regimes, Beijing starts exploiting them. However, China seems to be making a big mistake this time around, as it is looking to exploit Putin’s Russia.

In modern human history, there is one unavoidable rule of geopolitics- if you annoy and take on Russia, you do so at your own peril. Russia thrives in crisis situations and it doesn’t stop at anything short of the complete annihilation of its enemy in case of a clash. And under Putin, Russia has only become more unforgiving towards its enemies. The most latest example of Russia’s dangerous character has to be Nazi Germany, which clashed with Russia only to witness its own extinction by the end of the Second World War. Now, Xi Jinping’s Chinese Communist Party could be making the same mistake in 21st century that Hitler’s Nazi Party had made in the 20th century. The CCP is attacking Russian systems.

As per the latest report, an amalgamation of Chinese State-sponsored threat groups may have been behind a spate of targeted attacks against Russian federal authorities last year. Simply put, Chinese hackers could be hacking into Russian assets, which is actually suicidal on their part, as Moscow itself maintains a large and formidable army of cyber experts who can carry out disproportionate cyberattacks against the Chinese Communist Party (CCP).

The latest research report about Chinese cyberattacks against Russia has been released by Singapore-based company Group-IB, which delved into a computer virus “Webdav-O”. The said virus was detected in the intrusions into systems operated by Russian federal authorities, and the cybersecurity firm observed similarities between “Webdav-O” and “BlueTraveller,” which is known to be connected to a Chinese threat group called TaskMasters.

“BlueTraveller” is reportedly deployed for espionage and stealing confidential information, which explains the malicious purposes for which Chinese State-backed hackers might have used “Webdav-O” against the Russian federal authorities.

The latest report builds on similar reports of Chinese cyberattacks against Russia by Solar JSOC and SentinelOne in May this year. Solar JSOC had stated, “The main goal of the hackers was to completely compromise the IT infrastructure and steal confidential information, including documents from closed segments and email correspondence of key federal executive authorities.”

China and Russia are thus on a collision course, as Beijing seemingly cannot resist the temptation of using its huge cyber warfare network in check against Russian systems.

China has developed an organic system of hacking, targeting foreign technology with the number of personnel serving in the “hacker army” estimated somewhere between 50,000 to 100,000 individuals. Last month, US Secretary of State Antony Blinken warned, “The PRC’s Ministry of State Security (MSS) has fostered an ecosystem of criminal contract hackers who carry out both state-sponsored activities and cybercrime for their own financial gain.”

Well, Blinken is right. China’s cyber warfare apparatus is huge. The country now boasts of the most internet users in the world, with nearly 1 billion people in the country having access to the internet. The CCP knows how to use this huge population of internet users.

Contrary to what you think, China doesn’t operate a very systematic structure of hackers.  In fact, there are many actors in China’s “hacker army”, some of whom are State-controlled and the rest are deliberately allowed to thrive by Beijing. The CCP taps into its large number of internet users for raising an army of hackers.

The CCP has been mixing its brand of expansionist nationalism with wide access to the internet for creating a number of self-acclaimed “red hackers”, who aid Beijing in attacking the cyber-infrastructure of foreign governments. For China, the low cost involved in maintaining an army of State-backed and self-motivated hackers makes cyber warfare a tempting avenue.

The Chinese People’s Liberation Army (PLA) is also no longer hesitant in admitting that China has built up network attack forces and has also classified them into three categories, namely “specialized military network warfare forces”, “PLA-authorized forces” and “Non-governmental forces”.

Yet, no matter how large the Chinese “hacker army” maybe, it is no match for the Russian hackers. For the past twenty years, Russian hackers are alleged to have carried out some of the most sophisticated cyber attacks against systems of agencies like the US Department of Energy, NASA, and the US Defense Department (DoD).

Last year, the UK also accused Russian hackers of targeting research organisations developing Coronavirus vaccines. The Russian hackers were accused of hitting government departments, diplomatic missions, think tanks and health care targets. The underlying message is that even the most sophisticated and protected of systems aren’t impenetrable for Russian hackers. If China actually wages cyberwarfare with Russia, it must pre-judge the kind of ferocious response that it will generate from Moscow.

Also, the actions of Chinese hackers are bringing the US and Russia on the same page. Biden used to blame Russia for cyberattacks on American systems, but with reports of Chinese cyberattacks against Russia, he is willing to cooperate with Putin in cybersecurity. It would certainly be a bit too much for the Chinese “hackers army” to take on a combination of US and Russian cyber experts in case Putin and Biden decide to join hands against the Chinese hackers.