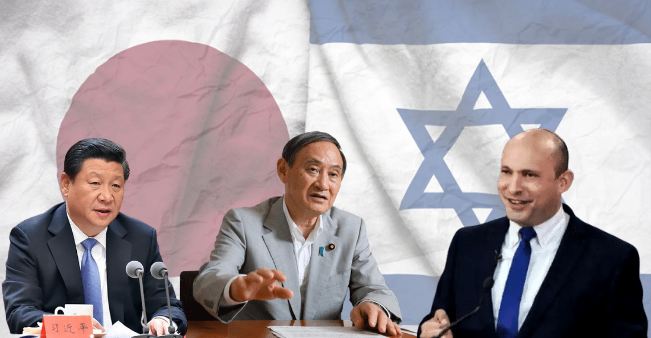 Japan is really eager to punish China for its misadventures. So, Tokyo is befriending every single Chinese enemy. Japan has already forged very close ties with countries like Taiwan, India, Australia and Vietnam in order to hurt China. Japan is emboldening China’s enemies in every part of the world. And now, it is looking to hurt Beijing in the Middle East by engaging Israel.

According to Nikkei Asia, Japanese Foreign Minister Toshimitsu Motegi will visit Egypt, Jordan, Turkey, Israel, Palestine, Iran and Qatar. This is a part of Tokyo’s efforts to consolidate its interests and enhance its presence in the strategic Middle East region. The biggest highlight however is Motegi’s visit to Israel, at a time when bilateral relations between China and Israel have hit the rock bottom.

Japan is, of course, troubled by Chinese belligerent activity in the East China Sea, especially in the Japanese waters surrounding the Senkaku Islands. Meanwhile, even Israel is realising that Beijing is not a reliable partner. Earlier this year, China was found supporting Hamas during an escalation of hostilities between Israel and Hamas.

When skirmishes broke out between Israel and Hamas, China clearly chose Palestine, Iran and the two-State solution over Israel’s interests. In fact, China is becoming a tangible security threat for Israel. As per recent reports, a group of Chinese cyber spies posed as Iranian hackers while carrying out a cyberattack on Israeli government information. The Chinese cyber spies tried to break into Israeli systems and access sensitive information.

Security company FireEye, which identified the group responsible for the cyber attack along with Israeli security agencies, explained the motive behind the cyber attack. It stated, “This cyber espionage activity is happening against the backdrop of China’s multi-billion-dollar investments related to the Belt and Road Initiative (BRI) and its interest in Israel’s robust technology sector.”

The security company added, “China has conducted numerous intrusion campaigns along the BRI route to monitor potential obstructions [including] political, economic, and security.”

The FireEye report is bound to trigger heated discussions in Israeli strategic circles. The Jewish nation simply cannot tolerate how China might be looking to hack into its systems in order to manipulate Israel and “monitor” Israeli obstructions to its BRI investments.

There is already a lot of awareness about how Chinese cyber-attacks could pose a big threat. Recently, Taiwan’s Digital Minister Audrey Tang and Foreign Minister Joseph Wu penned a joint opinion piece on Jerusalem Post. In the opinion piece titled, “Why Taiwan seeks Israel’s help to combat cybersecurity threats,” the two Taiwanese Ministers have suggested that while China carries out a number of cyberattacks in Taiwan, Israel could collaborate with the island country in cybersecurity.

In such circumstances, Israel would be looking for a substitute to China. The paper dragon has invested heavily in Israel’s technology and businesses. As per IVC Data and Insights, it invested $400 million in Israeli start-ups in 2018 and $243 million in 2019. Japan might just be the substitute that Israel needs.

For Israel, better ties with China were more of compulsion since Japan used to be somewhat skeptic due to the rift between Israel and Arabs. However, with the Abraham Accords normalizing ties between the Arabs and Israel, Japan has no issues in improving its relations with Israel.

Moreover, there are a variety of factors at play here- Israel has been facing a lot of pressure from the US, which wants the Jewish nation to decouple from China. For a long time, Israel was reluctant to embitter its ties with China given the level of investments at stake. But with Japan improving its relationship with Israel and China becoming more of a security threat, Israel is bound to make a strategic shift towards Tokyo.

Ultimately, Israel and Japan can come together to enhance their own position in the Middle East. Their main aim would be to make a big offer to the Arabs, so that they feel compelled to dump China. If Japan and Israel can stitch together a strategic alliance, China might as well get eliminated from the Middle East.