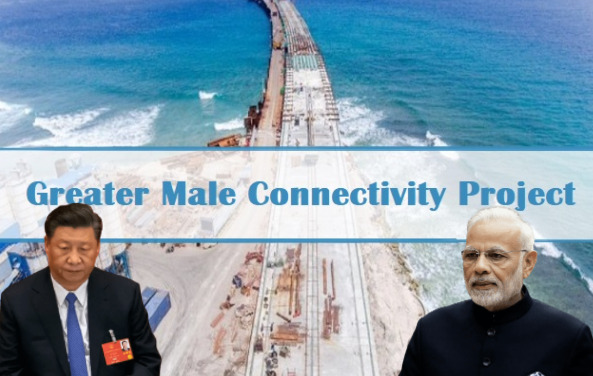 You would have definitely heard about China’s big debt trap. It is a part of Chinese President Xi Jinping’s flagship Belt and Road Initiative (BRI), whereby the Communist nation pumps hefty loans with exorbitant interests into strategically located countries. Ultimately, when the recipient country fails to discharge Chinese debts, Beijing takes over control of strategic locations.

In the Indian Ocean Region (IOR), Beijing is trying to encircle India with a ring of such debt traps around the country as a part of its “string of pearls” strategy. However, India has now managed to drill a huge hole in China’s debt trap well building around it with a massive project in the Maldives, an archipelago located in the IOR near India. This is India’s message to the world- development can be carried out without debt traps.

India and Maldives are reportedly set to sign a contract on the mega Greater Male Connectivity project (GMCP). This is going to be the largest infrastructure project in the archipelago nation and is therefore going to beat China when it comes to enhancing its presence in the Maldives.

GCMP is an ambitious project and will consist of a 6.74 km long bridge and causeway link connecting Male, the capital of Maldives, with islands of Villingli, Gulhifalhu and Thilafushi. Unlike Chinese projects, which are funded by commercially exploitative loans, GCMP will be financed under a grant of $100 million and a line of credit of $400 million from India.

GCMP is expected to become the lifeline of the Maldivian economy and it will create a major connectivity link joining the four main islands of the country where almost half of the archipelago nation’s population lives.

GCMP is bound to hurt China’s presence in the Maldives. In fact, GCMP will completely undermine the 1.4 km long Sinamalé Bridge connecting Male with Hulhule’ and Hulhumalé. The Sinamalé Bridge was built in 2018 with Chinese support.

Moreover, India is deeply involved in several infrastructure projects in the Maldives, such as the expansion of an airport, expansion of fisheries plants and building a cricket stadium and road projects. New Delhi’s involvement in the Maldives is rather benevolent and India’s line of credit is being reportedly used in ten projects including a cancer hospital.

India’s engagement with the Maldives practically dashes Beijing’s hopes of fanning anti-India sentiment in the archipelago nation. It seems that the Maldives understood how the paper Dragon burdened it with an unsustainable $3.4 billion debt. With a regime change in 2018 and the victory of a pro-India, anti-China leader, Male understood that it was a much more prudent move to befriend India at China’s expense.

Enhancing presence and influence in the Maldives, and keeping China away from the archipelago nation is a part of New Delhi’s foreign strategy. Firstly, India considers the IOR its natural sphere of influence and secondly, China can weaponise any position of strength in India’s vicinity. For these two reasons, India is doing everything under its control to keep China at bay in the archipelago nation.

In fact, New Delhi seems quite capable when it comes to sabotaging one of China’s debt traps and driving a big hole in the colossal network of China’s exploitative projects.

What India has done in the Maldives is a lesson for the rest of the world. The world can develop without China’s debt traps. In fact, poor, underdeveloped and least developed countries must be protected from Beijing’s evil designs and should be given an opportunity of thriving in a friendly atmosphere.

If a rising power like India can literally rescue a country from the big Chinese debt trap, then there is no reason why the US or European nations should not compete fiercely with China in order to restrict its debt trap projects. Contrary to what some pessimistic analysts have to say, China isn’t invincible. All you have you have do is offer a better deal as India did with the Maldives and the recipient country will come rushing away from Beijing.

New Delhi is securing the IOR from China, however other powers like Japan, the US, Australia and the EU must join hands in order to keep China at bay in other parts of the world, particularly the Indo-Pacific.