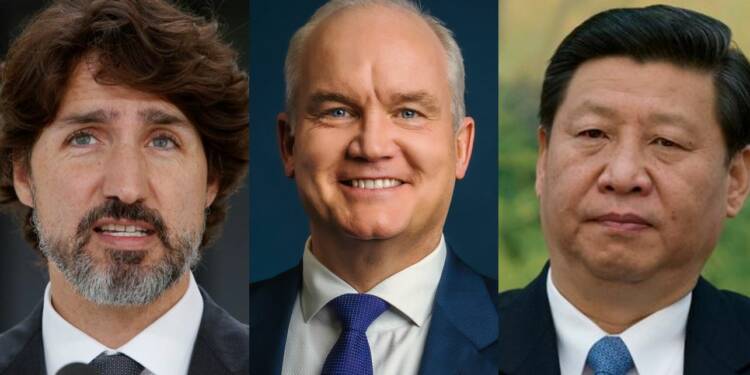 To the sheer amazement of the people who follow Canada’s foreign policy know-how, comfortable China is to make sure that it gets what it wants from Canada. Justin Trudeau’s whole leadership is filled with examples that prove that he is an asset for Beijing. Prime Minister Justin Trudeau is distanced from a $100 million contract with a Chinese state-owned shipyard to build a passenger ferry for a Canadian Crown company, a transaction that the Conservative Party has promised to terminate if they win power.

However, Conservative MP Pierre Paul-Hus, said his party under Erin O’Toole would scrap the contract if the Trudeau government went ahead with it. Over the objections of Canada’s shipbuilding industry and at a time when two Canadians have spent 990 days in Chinese prisons as victims of what Ottawa has called “hostage diplomacy,” the Globe and Mail reported on Wednesday that a large state-owned shipyard in China is building a 1,000-passenger ferry that Marine Atlantic Inc. will charter.

In late July, Marine Atlantic granted Stena North Sea Ltd. of Sweden a $100 million, five-year deal to charter a ferry. The business selected China Merchants Industry’s Jinling shipyard to build the 200-meter vessel, which will be delivered in 2024. Marine Atlantic is accountable to Parliament via the Minister of Transport, who also appoints members to the Crown corporation’s board of directors. According to a spokesman for Transport Minister Omar Alghabra, the minister had no role in the ferry contract’s approval.

Conservative MP Pierre Paul-Hus, stated, “This is unacceptable, and a Conservative government will immediately cancel the deal and ensure the ferry is built in Canada”. While Trudeau was letting the deal go through, the pressure from the conservative MP has forced him to scrap the deal with China.

The difference between Canada’s net and gross debt is around $1.5 trillion, according to the IMF, with the CPP and QPP assets accounting for nearly one-third of that amount. The remaining two-thirds are made up of common financial assets for most governments, such as currency holdings, cash deposits, debt securities, and other receivables. And while the country is already dealing with managing the other problems, Justin Trudeau wanted to give a good deal to CCP but failed.

Read more: Canadian Deputy PM says Canada has very little debt and can take some more – the reality is quite different though

In comments published Wednesday, Colin Cooke, president of the Canadian Marine Industries and Shipbuilding Association, said he finds it “extremely difficult to stomach” that the federal deal was approved while Mr Kovrig and Mr Spavor are detained in China. They were held in Chinese prisons for 990 days, with the lights on 24 hours a day. Conservative MP Pierre Paul-Hus, however, said his party under Erin O’Toole would scrap the contract. “This is unacceptable, and a Conservative government will immediately cancel the deal and ensure the ferry is built in Canada,” he said. These developments have forced Justin Trudeau to scrap the $100 million deal with China.