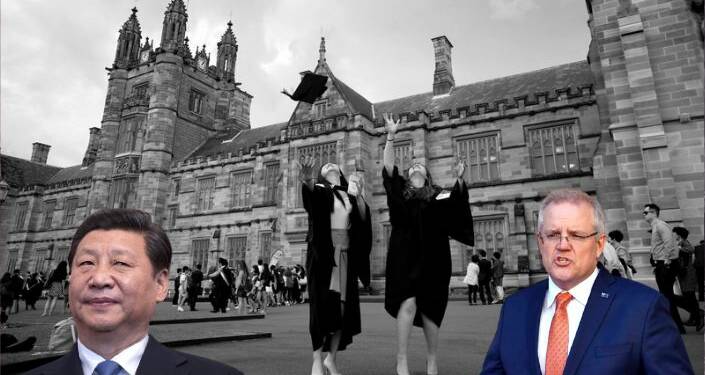 The Chinese Communist Party has used the education sector and the intelligentsia to infiltrate countries and increase their influence. This way of handling diplomacy is called hard power, a mix of soft power and coercion. However, Australia a country which has been facing this for quite a long time has decided that it has had enough. Under recently proposed laws, Australian university personnel and students would be taught how to spot foreign influence concerns on campus and report them to authorities.

The fact that Australia is no longer willing to entertain even an ounce of interference from China is an open book and it is willing to go to any lengths to make sure that the influence of Chinese Communist Party members and sympathizers are dealt with. According to an earlier investigation, Chinese pro-democracy students in Australia face intimidation and fear of repercussions if they speak out on controversial matters vis a vis China and its Chinese Communist Party. Human Rights Watch discovered that such pupils in Australia felt watched, forcing them to self-censor in class.

After that revelation, there was a lot of deliberation on the issue. The deliberations have led to the obvious epicentre and that is the CCP’s influence in the country. The latest adjustments were proposed as part of the university’s new foreign interference policy. According to the Sydney Morning Herald, they are meant to increase their ability to counteract Chinese Communist Party (CCP) influence. The guidelines state that staff and students would “get training on, and have access to information about how foreign interference can manifest on campus and how to raise concerns in the university or with appropriate authorities” as part of Australia’s increased vigilance against the CCP threat.

Due to security worries about stolen research, those involved in international research collaborations will also be educated on how to “acknowledge, mitigate, and handle concerns of foreign interference.”

Canberra has realised that the more opportunity it will provide the pro-democracy Chinese students to express themselves and write what they feel like, the more realities of mainland China will reach the world and the freedom of speech as an idea will reach the mainland too. And to see this succeed, the Morrison government has decided to protect these students as the Universities and concerned authorities have come up with the idea to allow students to submit written assignments under pseudonyms among other solutions.

The Morrison government has been continuously taking steps to make sure that the influence of the Chinese Communist Party and their ability to play with the sovereignty of Australia is done away with. Earlier, the Scott Morrison government had officially initiated a review of the Northern Territory’s 99-year-lease of the Port of Darwin to the Chinese-owned company Landbridge, signalling that the days of CCP doing what it wanted were over. As the government is in action mode in all spheres, how can they let the academia be intimidated by the CCP? The reports regarding the pro-democracy Chinese students self-censoring themselves because of being intimidated by the CCP has brought concerns to the Australian government. After this development, the latest steps come as the first recognition of the problem.

Read more: Morrison govt comes out to protect Pro-Democracy Chinese students in Australia who were on CCP hitlist

The Universities Foreign Interference Taskforce (UFIT) designed the guidelines in order to give universities stronger protection in four areas: cyber security, research and intellectual property, international collaboration, and culture and communications. It comes after Human Rights Watch released a study detailing how Chinese students were still being monitored by the CCP despite being in a democratic country outside of China. Education Minister Alan Tudge responded on Twitter, stating that the government would amend its foreign interference standards in light of the report’s recommendations.

Given such circumstances, these measures can be of extreme help going ahead, and also can help in the removal of the grip of the Chinese Communist Party on the intelligentsia and academics community. Now the steps to educate teachers and students about Chinese incursions on campus will be crucial in the way in which Australia will act going ahead.