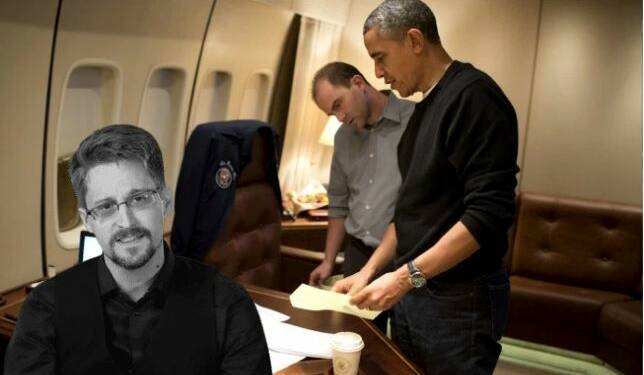 There is a major risk with carelessly boasting your accomplishments- you tend to tell things that you shouldn’t have. This is particularly true for Ben Rhodes, the then Deputy National Security Advisor to US President Barack Obama.

In a book titled, The World as It Is: A Memoir of the Obama White House, Obama went on to show off the extraordinary influence that he and Obama used to enjoy. However, in this entire process, Rhodes ended up revealing some dirty secrets about the Obama administration’s actions against whistleblower Edward Snowden. He has, by necessary implication, ended up refuting the theory that Snowden is a ‘Russian spy’ or ‘Kremlin agent’.

Rhodes, who has now become an MSNBC contributor has claimed that Snowden “was stuck in the Moscow airport, trying to find someone who would take him in. Reportedly, he wanted to go to Venezuela, transiting through Havana, but I knew that if the Cubans aided Snowden, any rapprochement between our countries would prove impossible.”

In his memoir, Rhodes further claimed, “I pulled Alejandro Castro aside and said I had a message that came from President Obama. I reminded him that the Cubans had said they wanted to give Obama “political space” so that he could take steps to improve relations. “If you take in Snowden,” I said, “that political space will be gone”.”

As if praising himself for bullying Cuba into not taking in Snowden, Rhodes added, “A few days later, back in Washington, I woke up to a news report: “Former U.S. spy agency contractor Edward Snowden got stuck in the transit zone of a Moscow airport because Havana said it would not let him fly from Russia to Cuba, a Russian newspaper reported”.”

What is wrong with Rhodes’ memoir

So, you might think that there is nothing wrong with the memoir and that Rhodes is merely praising the level of influence which the US enjoyed.

However, here is the real issue- several Obama officials had repeatedly claimed that Snowden was a Russian spy and a traitor as manifested by his “choice” to flee to Russia. However, the account that Rhodes has given in his latest book suggests that staying in Russia wasn’t Snowden’s “choice”, rather he was trapped and forced to stay in Russia by the Obama administration itself.

Even someone like Hillary Clinton had claimed that Snowden flew from Hong Kong to Russia in order to seek asylum from Russian President Vladimir Putin.

In fact, even Rhodes had said, “I’m telling you what I see, which is this guy went to China and Russia, the two most adversarial intelligence competitors to the United States; he could’ve gone to some very liberal European country that probably would’ve taken him in, or he could have faced the music here; the choice of those destinations speaks volumes.”

And surprisingly, Rhodes now himself admits that Snowden was headed for Havana when the Obama administration bullied Cuba into not taking the whistleblower in.

The Obama administration had every motive to tarnish Snowden’s image. Snowden, a former CIA contractor, had leaked some very uncomfortable truths of extensive internet and telephone surveillance by American intelligence in the Obama era.

It was revealed in both Washington Post and Guardian that the NSA had tapped into the servers of nine tech giants including Facebook, Google, Microsoft and Yahoo to track online communication with a software called Prism.

Slowly, more embarrassing leaks came in. It was revealed that the NSA had monitored calls of 35 world leaders. Snowden also told Hong Kong-based South China Morning Post that the NSA had led over 61,000 hacking operations across the world, including in mainland China and Hong Kong.

In fact, the US was also spying upon its own allies. The NSA had bugged EU offices in the US and Europe as per Germany’s Der Spiegel magazine. The German media also reported that Chancellor Angela Merkel’s mobile phone was also surveilled by the NSA.

Obama had then faced international criticism for his administration’s surveillance activities. When Merkel sought an explanation, Obama said that her calls were not being monitored then and wouldn’t be monitored in the future, but he did not deny having bugged her mobile phone in the past.

Clearly, US relations had soured with its allies across the world due to the shocking surveillance leaks. Obama’s pro-liberty image too had taken a major hit. This is why the Obama administration wanted to project Snowden as a ‘Russian spy’.

Obama administration quite conveniently made a traitor out of Snowden, by implicating that he chose Russia as his destination. The idea of Snowden migrating to Venezuela was also propped up in order to suggest that Snowden chose America’s enemies as his asylum destinations. In reality, Snowden was looking to go to Bolivia or Ecuador after reaching Havana.

If Snowden is in Russia, blame Rhodes and Obama for it. In fact, a desperate Obama administration went as far as threatening Cuba that any chance of normalising the bilateral relationship would be destroyed unless Havana withdrew the assurance of free passage given to Edward Snowden.

Rhodes’ account explicitly confesses that Obama trapped Snowden in Moscow. The purpose of ex-Deputy NSA’s memoir was to boast of his past accomplishments, but he has ended up demolishing the theory of Snowden being a Russian spy instead.

From Toshiba to OKI, Japan is pulling out its electronics giants out of China at breakneck speed