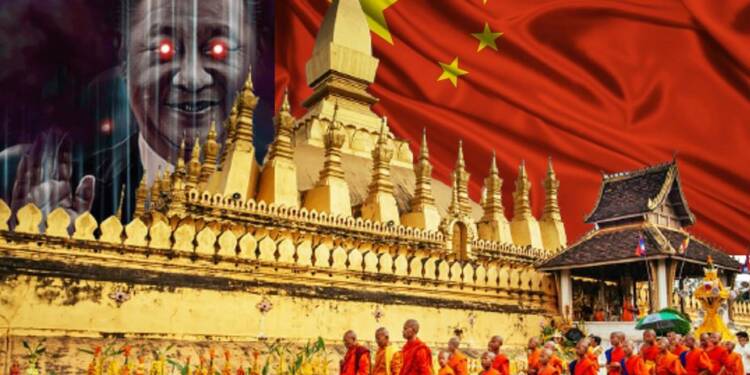 China, under the absolute control of Xi Jinping, is trying to script its own neo-colonialism and imperialism vis-à-vis Mekong countries in South-East Asia. In line with this, China has succeeded in making the two Mekong countries – Cambodia and Laos, economically subservient to the middle kingdom, that is, communist China. Now under the pretext of expanding investment and increasing the cultural connection between the two countries, Beijing has launched a cultural invasion. While CCP may think that they are going to succeed in this endeavour, criticism is mounting within Laos against the Chinese overbearing nature among other things.

Monks and people have objected to a real estate company’s intention to create a 100-meter-tall Buddha statue in a Chinese Special Economic Zone (SEZ) in the capital, seeing it as a cultural invasion and the start of an era of imperialism from their larger neighbour.

“If they built it in the Chinese style, it would draw a lot of negative reactions from the public,” said a resident of the capital Vientiane, who declined to give his name. “With a Chinese-style Buddha, Laos will lose its image and its identity. The Buddha statue should be Lao because it’s in Laos.” As reported by RFA, a resident of Luang Prabang province said the statue should be built in the authentic ancient Lao style. “Lao identity should be preserved,” he said. “It’s not appropriate to build a Chinese-style Buddha. I don’t understand why they want to build a Chinese Buddha.”

The criticism of the planned statue underlines artistic distinctions between two major schools of Buddhism: the statue is a Mahayana-style Chinese Buddha standing in a long gown, rather than a Theravada-style Lao Buddha sitting in a meditative stance. While this is the latest trigger, the people of Laos are becoming increasingly aware of the Chinese encroachment in their country.

The prelude to the event

Wan Feng Shanghai Real Estate Company received a 99-year licence on the 365-hectare SEZ in 2012, and plans to construct residential complexes, hotels, offices, restaurants, public parks, and other facilities there. A national steering group for the statue’s construction met at the end of last month, according to RFA. The ideas for a big Buddha were originally announced in 2016, but they look to be going forward now, according to RFA.

The proposed Buddha statue encapsulates the dominant character of China’s economic involvement in Laos in a concrete form. If erected, it would be Vientiane’s third tallest structure, viewable from most parts of the city of 950,000 people. It would also cast a shadow on the ‘That Luang’ stupa, a symbol of their ulture and nationhood located in the same eastern district of Vientiane as the That Luang Marsh SEZ, as its name suggests. The people of Laos are able to understand the veracity and extent of the impact this project will have if it goes through.

Late last year, Laos became the latest victim of the Chinese debt trap as after strategically dehydrating the country and burying it under unsustainable Chinese loans, China occupied the country’s national power grid after Laos was struggling to avoid defaulting on Chinese debt. In a worrying development, Laos ceded majority control of its electric grid to a Chinese company as the country struggled to avoid a default on Chinese debt.

According to the rating agency, Moody’s, the country’s debt service obligations last year were estimated to be around $1.2 billion with foreign reserves plummeting to just $864 million in June. Toshiro Nishizawa, a Japanese professor who has advised the Laos government on fiscal stability, said, “Economically Laos is going to depend more on China and this is inevitable.”

These assessments tell us exactly why the government in Laos is not able to suspend or cancel any project that comes from China and has no choice but to accept it, whether the people like it or not. However, as the resentment is mounting, the government will find it more and more difficult to do the bidding of the CCP.

Creating a Chinese colony out of Laos

China for a long time has been taking actions to take control of the lower Mekong countries and in its efforts, has invested fortunes to see its intentions fructify. In the case of Laos, Beijing has been successful in its efforts for a while, however, with increasing criticisms, things may change really fast.

Highways between the two countries have been upgraded since the end of the Cold War, notably in the last decade, supercharging the old mule commerce routes and smuggling trails that once connected the Lao principalities to what is now southern China. These have now been complemented by the construction of a new railway connecting Vientiane with China’s Yunnan region, which is set to open in December.

Also read: After unleashing coronavirus in the world, China is preparing to starve Laos, Vietnam and Cambodia

As a result of this integration, Chinese immigration to Laos has increased dramatically, particularly in Vientiane and the northern province capitals. Given the country’s limited legal structure and the political sensitivity surrounding Chinese migration, estimates vary, but one estimate puts the number of Chinese expatriates in Laos at 300,000. This is the most basic yet effective way to control a nation and convert it into a colony by induced demographic changes.

While all these issues are of a high concern, the fact that the public is opening its eyes to the real intentions of the CCP will make sure that the Chinese intentions of cultural invasion and neo-colonial ambitions are not a smooth ride.