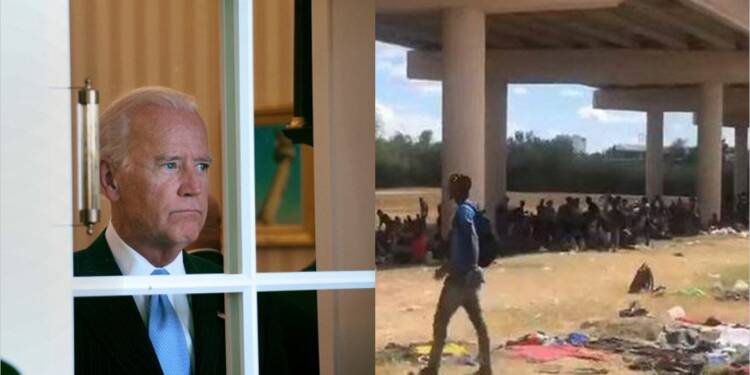 Joe Biden’s capability in making a mess out of a favourable situation is an established fact, but now Joe Biden is proving that his foolishness knows no bounds and he can be as catastrophic for the US domestic situation as he was for Afghanistan. The situation at the southern borders with Mexico was already a disaster and now as the migrants’ swarm near the border town of Del Rio, Texas, the government of Texas is struggling to manage the huge flow of immigrants. In recent days, more than 15,000 illegal immigrants, including Haitians, Cubans, and Venezuelans, have illegally entered the United States, and taken refuge beneath the border bridge linking Del Rio, Texas, and Ciudad Acuna.

Del Rio now: US on the left, Mexico on the right.
Constant stream back and forth as the illegal immigrants get supplies in Mexico.

Law enforcement preparing against a rush for the border fence as the aliens find out they might be deported. pic.twitter.com/TgxK5Sdrv1

Even though several officials and legislators, including Rep. August Pfluger (R-Texas) and Sen. Ted Cruz (R-Texas), have visited the town, exchanged photographs, and encouraged the Biden administration to act, Biden and Harris have been conspicuously absent. The congregation of so many people seeking entry into the USA was predictable from afar, and it has led to the creation of mini-Afghanistan right next to its southern borders.

The statistics of the border crisis

According to the US Customs and Border Protection, the number of “border contacts” in August 2021 was 208,887, up 106 per cent from February and 317 per cent from a year before. Today, Fox News was the first to report on the August border apprehension number, which was released before it was posted on the CBP website.

According to the website, 101,089 border interactions occurred in February 2021, roughly one month after the new Biden government took charge of the office on Jan. 20, 2021.

Recommendations for Biden administration to pay heed to the crisis

House Minority Leader Kevin McCarthy said on Friday that the Biden administration “must recognise” the Haitian migrant surge at the US-Mexico border in Del Rio, Texas, as a national security crisis and deploy the National Guard to assist Border Patrol agents with “more resources to control the situation.” As part of a new rush of migration to that stretch of the border, more than 10,000 migrants, mostly from Haiti, are taking refuge under a bridge in Del Rio.

“It is no coincidence this is happening as Democrats in Congress are moving to pass legislation that would grant immediate citizenship for up to 10 million illegal immigrants,” McCarthy said in a statement. “This is a wake-up call to Democrats that their policies are putting American lives in danger and must be abandoned.”, she further added.

The mini-Afghanistan situation on southern borders

According to internal documents obtained by NBC News, US Immigration and Customs Enforcement planned to increase deportation flights to Haiti during the coming week. “To promptly handle the current volume of migrant encounters and to ensure a safe, humane, and orderly process,” the Border Patrol said on Thursday. The area beneath the bridge was set aside to “avoid injuries from heat-related disease” while migrants waited to be taken into custody, according to the agency.

The Biden administration faces a humanitarian issue as a result of the growing population; this is similar to the mess it has created in Afghanistan. Amid terrible sanitation conditions, many people are sleeping on the ground and enduring triple-digit heat.