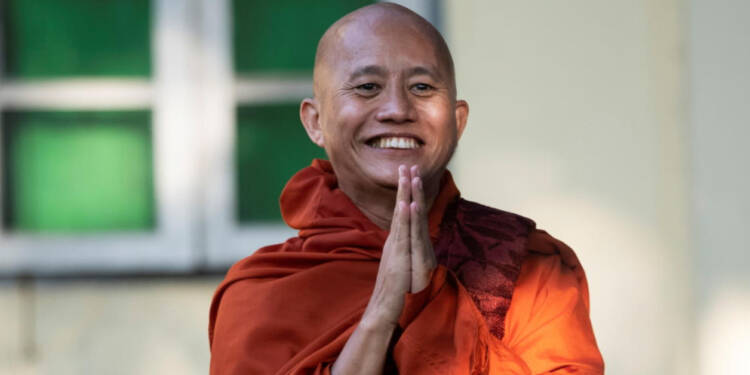 There are times when leaders need to take harsh decisions for the greater good of a country, for example the Sri Lankan government’s actions, which were harsh but were also the last resort. The Burmese Military released firebrand Buddhist Monk Ashin Wirathu from prison on September 6, two years after he was charged with sedition for allegedly making insulting remarks about former leader Aung San Suu Kyi. He was a fugitive for months before surrendering in November of last year. Ashin Wirathu was charged with fostering “hate or contempt” for the civilian administration and “stimulating disaffection.” Maj. Gen. Zaw Min Tun, spokesman for the Myanmar military, said, “The matter was closed and he was discharged this evening,” before adding, “He is still undergoing medical care at the Tatmadaw Hospital.”

It’s unclear why the monk was being treated at the military hospital or for what he was being treated. The monk was released months after Myanmar’s civilian government was toppled. This Buddhist leader has had a significant impact in the larger contemporary history of Myanmar. While there may be credible evidence confirming his accesses, one cannot deny that it was war and both sides fought viciously.

In 2013, Time Magazine used the phrase “The Face of Buddhist Terror” to describe Ashin Wirathu. Some have even dubbed him the “Buddhist bin Laden.” “[Muslims] are multiplying so fast, and they are snatching our ladies, rapping them,” the monk was quoted in Time Magazine as stating. They want to take over our country, but I’m not going to let them. Myanmar must remain Buddhist.”

Ashin Wirathu, for one, accused Time Magazine of “serious Human Rights Violations” for failing to quote him verbatim in their article. “Previously, I had heard [rumours] that the Arab world was gaining control of the worldwide media. This time, however, I’ve seen it for myself.”

The leading role in the 969 movement

Within Myanmar, Ashin Wirathu has a number of detractors, with some monks feeling that he spreads hatred between ethnic groups. Nonetheless, when Time Magazine dubbed him “the face of Buddhist terror,” Thein Sein, the country’s then-president, slammed the publication, accusing it of slandering Buddhism. He called Wirathu a “Son of Buddha” and defended him as a “good person” who wanted to bring peace to the world.

Rohingya Muslims and his call for the fight against Islamic extremism

Harakah al-Yaqin (Faith Movement, HaY) is an insurgent force led by a committee of Rohingya émigrés in Saudi Arabia and commanded on the ground by Rohingya with international training and experience in modern guerrilla warfare methods. It enjoys strong sympathy and backing from Muslims in northern Rakhine State, including several hundred locally trained recruits, and benefits from the legitimacy supplied by local and international fatwas (religious judicial opinions) in support of its cause.

Also read: Because Hindu Lives Don’t Matter: How Global Media Hid the Plight of Hindus caught in the Rohingya Wildfire

The Rohingya Patriotic Front armed group was created in 1974 from the remnants of previous failures, spurred by the development of pan-Islamist movements around the world. In 1982, it broke into various sections, one of which became the Rohingya Solidarity Organization (RSO), an armed organisation. The Arakan Rohingya Islamic Front (ARIF) splintered from the RSO in 1986, and the two parties created a loose coalition, the Arakan Rohingya National Organisation, in 1998.

The RSO had tiny bases in isolated sections of Bangladesh near the Myanmar border in the 1980s and 1990s, but none were thought to exist within Myanmar. Several dozen rebels infiltrated Maungdaw from Bangladesh in April 1994, including a party that arrived by boat near Myin Hlut village-tract, south Maungdaw. They planted bombs in Maungdaw town on April 28, causing damage and many civilian injuries, and fighters responded with attacks on the town’s outskirts. The gang did not have sufficient local backing, and security forces rapidly crushed them after being notified by informants.

“I am defending my loved one, just as you would defend your loved one,” Ashin Wirathu asserted. I’m merely advising folks to be cautious of Muslims. Consider how you would react if you had a dog that would bark at strangers approaching your home to warn you. That dog reminds me of myself. “I start barking.”

In 2003, Ashin Wirathu was also arrested for his sermons and sentenced to 9 years in prison. Despite this, he maintained a high level of respect in the country. He is a Buddhist of the Theravada tradition. Some suspect he’s in cahoots with the Burmese military; it was his calls that had permanently solved the sovereignty problem in Rakhine region of the country.