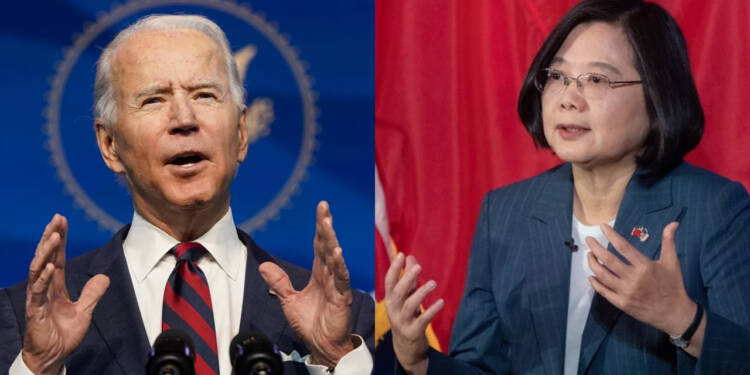 For the United States of America, the other way of defending Taiwan from a Chinese invasion is to simply allow Taiwan to cede it to China. For decades, the US kept downplaying the Chinese threat looming over Taiwan. Instead, it kept pushing for elevating its ties with China to counter the Russians. In 1996, when China began mobilizing its troops and conducted a massive missile exercise to intimidate Taiwan, then-President Bill Clinton agreed to send two carrier task forces under intense pressure from the CIA and military.

The unexpected move was enough to force China to back down from the invasion plans. On the contrary, 25 years later, the similar moves by the US are dangerously emboldening the Chinese government to an extent that the PLA is brazenly carrying out the largest ever incursion in the Taiwanese airspace with 56 of its advanced fighter jets.

USA’s lip-service and its prostrating before the PLA

The threat of the Chinese invasion is real for Taiwan. 93 Chinese military planes have flown into its air defence zone in the past three days. Besides statements, the US has done nearly nothing to rein in recent Chinese incursions. “The United States is very concerned by… China’s provocative military activity near Taiwan, which is destabilizing, risks miscalculations and undermines regional peace and stability,” the US state department said.

But it’s not the mere statements that make the US the flag-bearer of open and free societies. The USA’s dovish response to the massive Chinese hostility stems from the notion that it has become a weaker military power in the Indo-Pacific owing to the massive military modernization that the PLA has gone through in the past 25 years.

Read More: As far as the Taiwan question is concerned, the Biden administration has surrendered before Beijing

Pentagon concedes defeat without even firing a single bullet

As reported by Epoch Times, the Pentagon has recently determined that the U.S. might be defeated and certainly would suffer heavy losses of personnel and equipment, should the US forces come to the defense of Taiwan. The military experts in the US are also growing wary of the fact that the USA’s aircraft careers deployed in the region could also become an easy target for Chinese missiles fired from long distances.

Indeed, the US helped China buy the much-needed time to prepare itself to nullify the US deterrence against Chinese invasion and eventually materialize its unification ambitions. And today, the American strategists are fretting about the grave consequences of a full-blown war with China. Certainly, a war with China would cost America thousands of its troops, military assets worth billions and perhaps its political stability too. It won’t be a cakewalk for any sitting US president to convince the taxpayers of such costly adventurism.

Chinese Taiwan- the only way forward for the US

As Epoch Times’ article suggests, the US would push Taiwan for negotiations with China if a Chinese invasion becomes imminent. And negotiations would simply end with China taking over Taiwan because China won’t make a settlement if complete control over Taiwan is not offered. Still, the US may go ahead as it would help the US save billions of dollars and maybe thousands of lives.

Read More: Biden administration is ready to sacrifice Taiwan to not antagonize China, its latest statement proves that

Given China’s brazen attempts of normalizing its incursions in the Taiwanese Air defence zone, Taiwan’s war with China has already begun. Taiwanese foreign minister Joseph Wu has already warned that his nation is preparing for a war with China. “If China is going to launch a war against Taiwan we will fight to the end, and that is our commitment. I’m sure that if China is going to launch an attack against Taiwan, I think they are going to suffer tremendously as well,” told Wu in an interview.

The threat of a Chinese invasion and ensuing catastrophe is looming large over Taiwan. Inconsolably, the US seems clueless vis-à-vis its response to the Chinese aggression. While the US should have been backing its ally Taiwan against the Chinese tyranny, it’s meekly prostrating before China to avert a military clash with PLA.