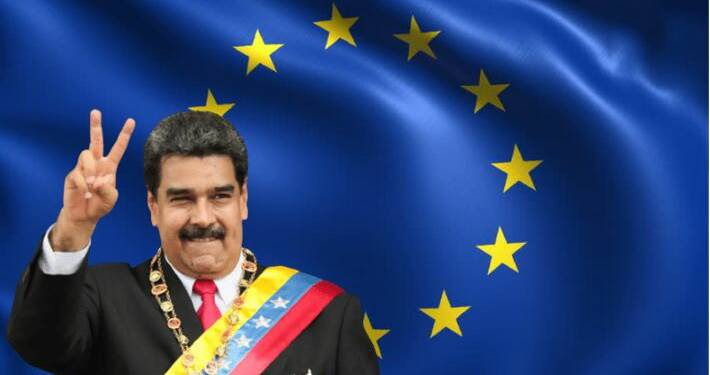 The European Union – a supposed champion of democracy, human rights and liberties has begun caving into a socialist dictatorship. While this is not the case within the geography of the EU just yet, the 27-nation-bloc has set in motion a plan which will end up giving credence to Venezuela’s dictatorship, led by Nicolás Maduro, who has long been trying to obtain international recognition for his fake elections. Venezuela is an economically poor nation always staring at starvation and a food crisis. This, despite the fact that it is a natural resource goldmine. However, a continuous Left-rule over the country has really turned the Latin American nation’s fortunes upside down.

And now, Venezuela’s regime is waking up. It knows it is sitting on a goldmine of oil, which remains to be exploited. And it has found a big partner to exploit its massive oil reserves with. We are talking about the European Union, which has abandoned all of its supposed ‘liberal’ and ‘progressive’ principles just to secure a heavy chunk of oil supplies from Venezuela.

What is the European Union Silently Up To?

According to a statement by Josep Borrell, a high representative for foreign affairs, the EU will send an electoral observation mission to Venezuela’s upcoming November 21 regional and local elections. In fact, the EU has even begun calling Venezuela’s sham elections an “unprecedented electoral process.” According to a report in the Miami Herald, the EU is expected to produce two electoral monitoring reports. The first will be issued on the night of the election, assessing whether there were any major irregularities. The second is expected to be produced months later, evaluating whether the entire election process was free and fair.

You would think that at least the two monitoring reports will be free and fair. Well, here’s how the EU teams, led by a socialist himself, will be preparing the reports on the veracity of the upcoming Venezuelan polls – which Nicolás Maduro is slated to win, by the way, since the entire election process has been carved in his favour.

Sources familiar with the monitoring mission say, the EU observation mission will only be able to monitor 3.5 per cent of the polling places. And the EU’s electoral observers may inform the Nicolás Maduro dictatorship in advance, for security reasons, where they are going, which will allow the government to make sure that no irregularities take place in those municipalities. There’s also a cherry on top of it all. Josep Borell, who belongs to the Spanish Socialist Party has appointed Portuguese Socialist Party member Isabel Santos to lead the electoral mission to Venezuela in order to tilt the scales in favour of the dictatorial Nicolás Maduro regime currently ruling the country.

It takes no genius to realise that in a dictatorship, the incumbent will win all elections – irrespective of how the people of that country vote. The EU, however, is rushing to Maduro’s rescue for its own vested interests. Now, let us have a look at what these interests are.

Russia is the EU’s main supplier of crude oil, natural gas and solid fossil fuels. In 2019, almost two-thirds of the EU’s crude oil imports came from Russia. When it comes to natural gas, in 2019 alone, Russia fulfilled well over 40 per cent of the all-natural gas needs of Europe. Russia, in the same year, supplied 46.7 per cent of Europe’s solid fossil fuel needs. So, on all counts, Europe has an uncomfortable dependency on Russia, and Vladimir Putin knows this dynamic very well, which is why he has a way of getting things done the way he wants them done with Europe.

Wow. Just wow!#Gazprom reduced the gas flow to Europe
via Belarus and Poland by 70%
and via Ukraine by 20%
Since. Last. Week.
These are official Gazprom figures. Putin is using energy as a weapon, calling the Merkel-Biden bluff, and Germany does NOTHING to counter the move. pic.twitter.com/M3BvAT8pAB

The EU is now accusing Russia of pushing up gas prices in Europe, which have surged to record highs amid tight supply and other factors. This, European lawmakers argue, is being done by Russia by fulfilling its sales obligations under long-term contracts but not adding more supplies, thereby creating an energy deficit in Europe which has begun startling the bloc. The EU is also alleging that Russia has applied pressure to try to speed up the Nord Stream-2 pipeline’s approval, by not supplying extra gas to Europe as prices have surged. All said and done, it is safe to say by now that Russia has a monopoly over Europe’s energy supplies and prices, and the EU knows this.

So, the EU is trying to safely decouple itself from Moscow on an immediate basis, which is why it is turning to Venezuela, out of all other nations in the world with energy supplies to offer.

Venezuela has the potential to be the oil powerhouse of the world, with more than 303 billion barrels of proven oil reserves, while the recoverable barrels from the Orinoco Oil Belt are estimated at another 500 billion barrels. Compare this with Saudi Arabia, which has roughly 270 billion barrels of proven oil reserves, along with an estimated 90 billion barrels from as-yet-undiscovered reservoirs. In other words, Venezuela’s total oil reserves, both proven and unproven, are more than twice that of Saudi Arabia! And they remain unexploited. All that Venezuela needs to open its oil treasure is a trusted partner which will help the Nicolás Maduro regime gain international acceptance despite being a mad Communist dictatorship. And the European Union is very keen to play that role.

In 2018, the oil output for Venezuela had dropped to as low as 1.2 million barrels per day. Now, if Europe can dramatically cut down on its dependency on Russia in terms of energy needs, it will be willing to set up proper infrastructure to exploit Venezuela’s massive oil reserves. Nicolás Maduro, however, seems to have set some preconditions to allow that, which is why the EU is going out of its way to placate Caracas.