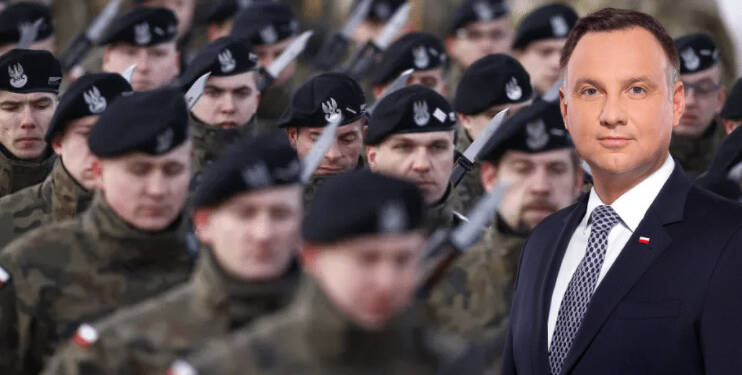 With 2,50,000 active soldiers and 50,000 reserve forces, Poland has vowed to build the largest army in the European Union. The development holds three strong messages, each for Moscow, Brussels and NATO.

Polish Deputy Prime Minister Jaroslaw Kaczynski says that the new proposals would “address the deteriorating international situation and the problems presented by Poland’s geopolitical location”. Under the proposed defence bill, Poland’s arm forces will also be given powers to purchase weapons from either the US or any European partner.

Poland takes the matter into its own hands

Concerning Poland’s geopolitical location, fortifying the country’s borders with Belarus and Russia becomes a cogent necessity for Warsaw. Tensions with Belarus have been running hot of late, which Poland has accused of pushing Middle Eastern and African migrants to seek entry to the EU through Poland.

Moreover, Poland also blames Russia’s “imperialist mindset” for its ramping up of the military apparatus. The Deputy Prime Minister also hinted that his country could be preparing for war. “If we want to avoid the worst, that is war, we have to act according to the old rule: ‘If you want peace, prepare for war’,” the minister was quoted as saying by the AP.

But Poland is also a NATO member. Hence, the responsibility of Poland’s defence is shouldered by the countries like France and the US. In any event of war with Belarus or its backer Russia, Warsaw can invoke article 5 of the NATO framework to press its NATO allies to defend its boundaries.

If Poland’s recent behaviour regarding its defence needs is any indication, Warsaw is increasingly seeking to cut its overreliance on its allies to size. This reflects Poland’s growing disillusionment within NATO. The growing rift between the US and France, and the widening policy gap between Washington and Brussels has stoked fears among Poland that NATO could leave Warsaw to fend for itself in an event of war.

Several EU economies are today faring in hot waters owing to the ravaging pandemic. No country would like to enmesh itself in a war imposed by others in these difficult times. NATO’s reluctance in accepting Ukraine and Georgia into its defence framework explains its unwillingness to fight a war against Moscow. Hence, Warsaw is now forced to raise its own military to safeguard its borders.

Poland’s bold decision to elevate its fortifications comes at a time when the rift between Brussels and Warsaw is rife and expanding. The conflict between Poland and the EU over the priority of EU law is overshadowing a summit of the EU’s 27 member states, in Brussels. The EU may impose sanctions on Poland as a result of its top court’s judgement that several EU laws are incompatible with Poland’s constitution.

The notion of EU primacy over national legislation underpins EU case law. Poland accuses the EU of “blackmail,” while Belgium, like many others, says it must follow the laws. These differences and the no-compromise approach by the EU is angering Poland as it struggles to maintain the supremacy of the law of the land and tries to counter the EU led bullying.

Poland has historically been the European Frontier with the Russian Empire, and in the 21st century, it has been the EU’s frontier with the Russian Federation. Being in the position it is, and having a history of confrontation with Russia, both are sworn, enemies. In addition to this, the President of the popularly elected government of Poland also holds a personal enmity with Russia.

In such a condition, Poland is feeling betrayed by Germany’s Nord Stream 2 deal with Russia. Both Biden and Merkel have realised that they cannot stop the criticism coming from Poland and have thus decided to topple the popular right-wing government by using issues like LGBT rights. This has fuelled resentment among some Polish nationalists who are now increasingly demanding a BREXIT like an exit from the EU, termed Polexit.

With the Polish economy performing better than its EU counterparts and its ambitions of raising the most powerful military in the Union, Poland is seriously challenging the belligerent EU leadership. Poland lies on the Eastern flank of NATO and the EU; hence its growing disillusionment with both of them is an alarming sign for Europe’s security.