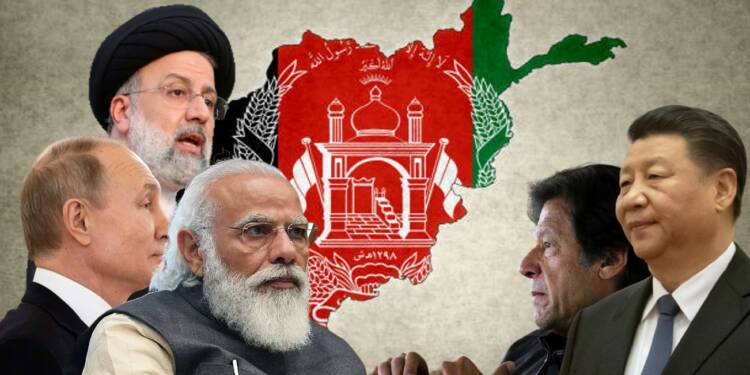 For the longest time, Pakistan has used its geographical positioning as a tool to play the USA and succeeded in creating a cash cow out of Washington D.C for more than two decades. However, as the situation has gotten out of the USA as well as western power’s hands, India has come out majorly in its efforts to address the crisis in the region. India organized a regional meeting on Wednesday to examine the current situation in the nation. Ajit Doval, India’s National Security Advisor (NSA), is the conference’s chair which is being attended by his counterparts from Iran, Russia and the Central Asian countries.

The disastrous US exit from Afghanistan and the overt capitulation to the Taliban made Pakistan further embolden in its ability to impact the developments in Afghanistan. In this background, China was confident of its victory in war with the US over the regional influence with the help of its Pakistani allies. However, India has shown, that being a responsible and net positive power pays hefty dividends in the long run. Now as India has pulled Iran, Russia and the Central Asian countries, it is a clear message to both Islamabad and Beijing that New Delhi will not let their agendas fructify.

The current summit and its significance:

The NSAs of Russia, Iran, China, Pakistan, Tajikistan, and Uzbekistan have been formally invited to the summit by India. China and Pakistan, on the other hand, have already announced their absence from the summit. Afghanistan did not send a representative for obvious reasons.

According to reports, this is the first time that all Central Asian countries — not only Afghanistan’s near land neighbours Tajikistan, Turkmenistan, and Uzbekistan – have taken part in negotiations in this manner alongside Kazakhstan and the Kyrgyz Republic. This significant development was only possible as India holds a special, neutral, and cordial relationship with all these countries and that is why they are willing to come to the same table to discuss the regional situation.

Xi had a simple offer for the Taliban- China will pay truckloads of money to the Taliban and to ensure a steady flow of the Chinese money, the Taliban will not say or do anything about Xinjiang, regardless of how Beijing torments the Uighur Muslims in Xinjiang. The Taliban has been milking China like a cash cow. The Taliban is demanding funds from Beijing for running day-to-day expenses to sustain a war-torn nation like Afghanistan and also for carrying out reconstruction activity.

China itself has ended up putting all its eggs in one basket. It relied on Pakistan’s external spy agency- the ISI and the Pakistan military to work out a deal with the Taliban. However, you cannot expect an extremist Islamist group to uphold its commitment. The Taliban doesn’t spare anyone including its long-time patron, Pakistan. And in such a situation India has roped in all the other major and influential powers in the region to decide the way ahead while leaving the real destabilisers out.

Iran and Russia believe in India as a true mediator:

Iran’s problems with the Taliban run into the realm of religion. Iran is dominated by the Shia clergy, whereas the Taliban is a Sunni-extremist group. Iran is particularly concerned about the fate of minorities like Hazara Shias in Afghanistan who have been traditionally tormented by the Taliban fighters.

On the other hand, Moscow has been very clear on the subject of its opposition against the Taliban, ever since the extremist group overran Afghanistan. Russian President Vladimir Putin publicly censured the Taliban and even refused to attend the government formation ceremony of the extremist group.

In fact, Russia has been holding military drills with Central Asian countries like Uzbekistan and Tajikistan that abut Afghanistan. It is also looking to supply weapons to these countries so that they can take on the Taliban when push comes to shove.

India, a respected and trusted power:

While the invited and the attending countries have differing interests, alignments and bilateral differences, there is one thing they all agree on, and that is the existence of a stable Afghanistan for the larger stability of the region. In this regard, India stands out as a moderator whose concerns and opinions will find greater acceptance in the West as New Delhi maintains the balance between its friendship with Iran and Russia as well as the western powers.

The Indian government has cautioned the global community not to rush into any formal recognition of the setup created in Kabul. It has also urged the world leaders to ensure that the Taliban deliver on their commitments that Afghan soil will not be used by terror groups. These concerns find larger recognition in the region, unlike the attempted takeover of Afghanistan by the Taliban-Pakistan-China nexus.

Both Tehran and Moscow understand the special position India holds and therefore, by working with India over the Taliban issue and the future of Afghanistan will find larger acceptance. By the latest summit, India has given a clear message to Pakistan and China that they cannot take India lightly, and if anything, it will be the attendees of today’s conference along with India who will chart the future trajectory of the region.