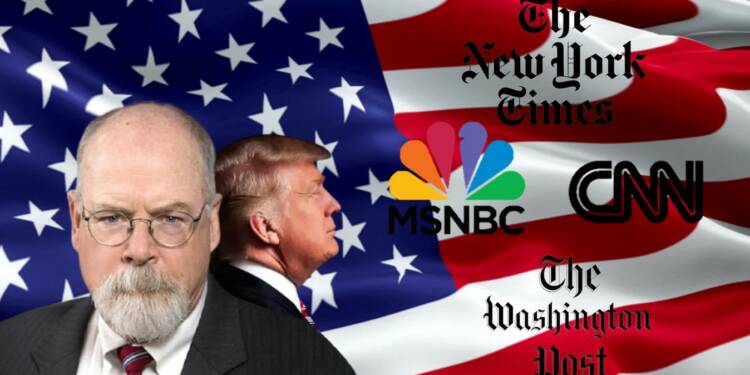 The American liberal media has been caught guilty, having committed one of the journalistic world’s most egregious errors by propping up the Steele dossier for four long years and constantly running commentary about allegations of former President Donald Trump having links to the Kremlin. Now that the issue has been resolved with the information carried by the Steele dossier appearing to be unreliable, it is the American media that has come directly under the scanner.

What is the Steele dossier?

Also known as the Trump-Russia dossier, the Steele dossier is a political research report compiled by former British intelligence officer Christopher Steele. The dossier was paid for by Hillary Clinton’s campaign and the Democratic National Committee (DNC).

The dossier was thereafter hyperventilated by the American liberal media. They extrapolated that former President Trump’s 2016 victory was a consequence of his Russia ties in a bid to back Hilary Clinton’s Russia trope that Democrats use against all their opponents.

Many journalists used the Steele dossier to power obsessive coverage regarding make-believe allegations of Trump’s links to the Kremlin. Some of them even won prestigious journalism awards in the process. CNN’s Evan Perez, Jim Scuitto, Jake Tapper and Carl Bernstein, for example, won the 2018 WHCA Merriman Smith Award for a January 2017 report that claimed that then-President-elect Donald Trump was officially briefed on the dossier.

Similarly, the New York Times and Washington Post shared the 2018 Pulitzer Prize for a “deeply sourced, relentlessly reported coverage in the public interest that dramatically furthered the nation’s understanding of Russian interference in the 2016 presidential election and its connections to the Trump campaign, the President-elect’s transition team and his eventual administration.”

The Steele dossier was never a very credible piece of information. However, last week, Special Counsel John Durham, who was appointed by the Trump administration to investigate the origins of the Russia investigation, further exposed the unreliable character of the document.

Durham charged Steele sub-source Igor Danchenko with making false statements to the FBI. The indictment exposed Danchenko’s ties to Democrats and has now cast a big shadow of doubt over the American liberal media’s obsession with the dossier. The anti-Trump sections of American media like CNN, MSNBC, The New York Times, and The Washington Post had devoted countless hours of news coverage and editorials towards the Steele dossier.

The Federalist senior editor Mollie Hemingway has even been quoted by Fox News Digital as saying, “If these outlets had the credibility to lose it would cause their credibility to go down, but because they have none it just cements they are not to be paid attention to in any way, shape, or form.” Meanwhile, Axios has described the moment as “The media’s epic fail.”

Washington Post has corrected and removed large parts of its two articles on the issue. To its credit, Washington Post’s media critic Erik Wemple has written at length about how media houses got it wrong at the time.

Yet, others like CNN are simply undermining the biggest media fail in recent times, simply because they don’t want to criticise themselves. CNN’s Don Lemon had for example claimed in November 2017 that “much of the dossier has been corroborated.”

Similarly, in June 2017, Wolf Blitzer had said that CNN has “corroborated some elements of that dossier”.

Now, CNN has covered the Durham indictment but as per Wemple,  “There was one thing missing from that discussion: CNN’s long-standing claim that the Steele dossier had been at least partly corroborated.”

For CNN, it is quite simple- the news network simply won’t admit that it messed up. BuzzFeed News, on the other hand, had published the entire dossier in 2017. Even now it reportedly has no plans for taking down the dossier from its website. Ben Smith, then BuzzFeed’s editor-in-chief, said, “My view on the logic of publishing hasn’t changed.”

Also, MSNBC’s Rachel Maddow, Nicolle Wallace and Chris Hayes had touted the Steele dossier and had claimed that it was not ‘disproven’. However, Axios reported that MSNBC did not respond to requests for comment about plans to revisit or correct its dossier coverage.

The Durham indictment is the second big win for former President Donald Trump over the recent past. A Washington Post-ABC News poll found that Americans’ approval of Biden’s Coronavirus Pandemic handling response has dwindled. The poll found that 47 percent of Americans approve, and 49 percent disapprove Biden’s handling of the Pandemic. This is in sharp contrast to a June survey in which 62 percent of Americans approved and 31 percent disapproved of Biden’s Coronavirus response.

The American liberal media had been harshly critical of Trump’s Coronavirus response and if the American sentiment is turning against Biden over the issue, then it actually means that the former US President is getting vindicated. Anyhow, the Durham indictment is a more crucial factor, as it will lead to more and more Republican supporters and on-the-fence voters realising that the former US President had become a victim of misinformation and fake news.

With Trump getting vindicated on all major fronts, we can expect the Republicans to make some deep inroads during the mid-term polls next year, which would set the stage for Donald Trump during the 2024 Presidential elections.