India is engineering an alliance between Tibet and Taiwan 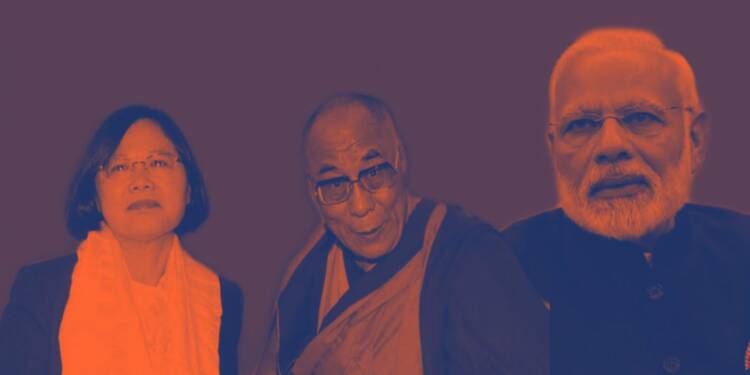 Tibet is a five decades old victim of Chinese expansionism and Taiwan is the main target of Chinese expansionism. As such Taiwan has a lot to learn from Tibet in order to avoid the kind of tragedy that ruined the Buddhist nation in the 1950s. In fact, India is engineering a strong alliance between Taipei and Tibet in order to mount pressure on Beijing.

A series of diplomatic interactions between the two sides has now raised hopes of better Tibet-Taiwan relations, much to China’s chagrin. Even at the top level, Tibetan spiritual leader, the Dalai Lama and Taiwanese President Tsai Ing-wen have started interacting with each other which is bringing Taiwan-Tibet relations into the limelight.

Tibet-Taiwan relations: a history of disagreements and disputes

Taipei and Tibet had a contentious relationship in the 1950s and 1960s. After moving to Taiwan, the Kuomintang (KMT) had re-established the Mongol and Tibetan Political Affairs Commission. It had also enacted a constitutional provision that asserted sovereignty over the Buddhist nation and anguished the Tibetan government-in-exile in India.

On its part, the exile government condemned KMT’s attempts to assert sovereignty over Tibet and also criticised Taiwan’s attempts to collaborate with Tibetan anti-Chinese guerrilla group Chu-Shi Gang Druk. Later, the KMT also established another Tibetan cabinet office in 1969, which was perceived as a big challenge to the authority of the exile government. Under such circumstances, Tibet and Taipei shared a hostile and contentious relationship.

Much of the hostility in Tibet-Taipei relations died down in the 1980s. As the Tibet issue got internationalized, the US got deeply involved, the Dalai Lama won the Nobel Prize and Taiwan itself transitioned into a highly democratic nation, Tibet-Taiwan relations started getting normalised.

Taiwan’s first elected president, Li Teng-hui, invited the Dalai Lama to visit the island nation in 1992. In 1997, the Dalai Lama visited Taipei for the first time and his visit hinted at the beginning of a new friendship between the two nations. As a consequence of the growing proximity, Taiwan recognised the exile government and established an Office of Tibet in Taiwan.

Later, during Chen Shui-bian’s Presidency in Taiwan, there were some major breakthroughs in the Tibet-Taiwan relationship. Taipei started giving the right of residency to Tibetan immigrants in the island nation and exiled Tibetans started getting treated as ‘foreigners’ instead of Chinese. However, the Tibet-Taipei relationship was subject to the policies and priorities of Taiwanese leaders. Therefore, when Ma Ying-jeou, a China dove, took over as Taiwan’s President, Tibet-Taiwan relations were put on the backburner.

How India is powering a new era of Tibet-Taiwan friendship

With India and China getting locked in a contentious dispute at their borders, New Delhi has started to promote better ties between Tibet and Taipei. India knows a Tibet-Taipei alliance would be a deadly combination and undermine China’s position in a big way. This is why India has been facilitating engagements between the two nations.

In October, for example, Sikyong Penpa Tsering of the Central Tibetan Administration met Taiwanese Ambassador to India Baushuan Ger at his office. The meeting lasted for one hour, and the two sides reportedly discussed issues of mutual interest and concern.

Meanwhile, there has been top-level engagement between Tibet and Taipei. Taiwanese President Tsai Ing-wen reportedly wished the Dalai Lama on his 86th birthday earlier this year. She tweeted, “Wishing a very happy 86th birthday to His Holiness the@DalaiLama. Thank you for teaching us the importance of coming together to help one another through this pandemic.”

Wishing a very happy 86th birthday to His Holiness the @DalaiLama. Thank you for teaching us the importance of coming together to help one another through this pandemic. pic.twitter.com/GWyrIVeMl4

In fact, the Dalai Lama and Tsai Ing-wen are becoming collectively popular and gaining traction at an international level. In May this year, posters displaying the Dalai Lama and Tsai Ing-wen appeared in Gaborone, the capital city of Botswana. Together, Tibet and Taipei can emerge as a symbol of resistance against Chinese hegemony while narrating the story of CCP’s brutality to the world at large.

After the Peng Shuai episode, WTA suspends all women tennis tournaments in China