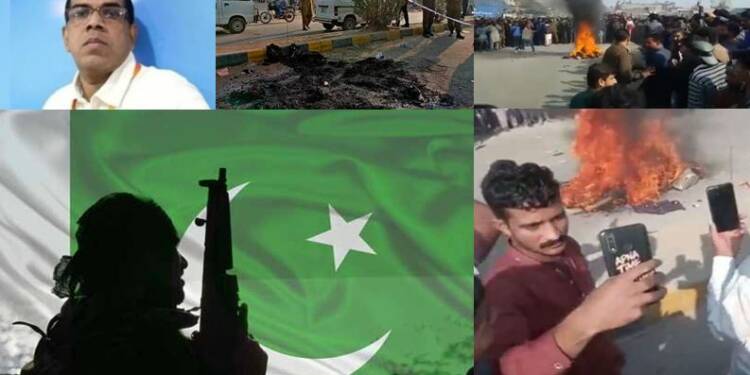 Pakistan is an Islamist hellhole. It is no place to stay for non-Muslims. All non-Muslims, who are referred to as ‘kafirs’ in Islam, are deemed fit to be killed by Pakistani Muslims. Pakistani Muslims are a special breed of rabidity. They are toxic, intolerant, violent, and supremacists of the highest order. Hilariously though, all Pakistani Muslims are converts. They were all once upon a time Hindus whose ancestors submitted before Islamic invaders instead of standing up to them. Yet, Pakistani Muslims suffer from a constant identity crisis, which makes them identify themselves as an Arab breed, although they are all of Indian descent.

This identity crisis makes Pakistani Muslims feel the unquenchable thirst of proving their worth to the ‘Muslim world’ and to Islam as a whole. So, in pursuit of such glory, these Islamists can go to any extent. Killing non-Muslims, and even Muslims who they consider lesser mortals, is a common sighting in Pakistan. On Friday, a Sri Lankan man named Priyantha Diyawadana, who worked as general manager of a factory of the industrial engineering company Rajco Industries in Pakistan’s Sialkot town was killed and then set on fire by a murderous mob of bloodthirsty Islamists. According to reports, the man was accused of blasphemy over some posters he had allegedly removed.

In dreadful videos circulating across social media, murderous Islamists can be seen brutally beating Diyawadana and tearing his clothes. While some of the Islamists were beating him to death, others were taking selfies, putting on naked display the inhumane mentality which grips all of Pakistan. The incident took place over rumours that Diyawadana had removed a poster bearing words from the Qur’an.

With chants of 'gustakh-e-nabi ki ek hi saza, sar tan se juda sar tan se juda', fanatics in Pakistan have burnt a man alive after accusing him of blasphemy. The victim was a Sri Lankan pic.twitter.com/7S2FDMRTzw

He worked for company that made T20 gears for Pak cricket team.

That 2 guys claiming that they killed Sri-Lankan in #Sialkot pic.twitter.com/7jFg9YmM5b

During the lynching of the Sri Lankan man, the Islamist mob was chanting a slogan which is a very familiar saying among Muslims. It was the chant of “gustakh-e-nabi ki ek hi saza, sar tan se juda sar tan se juda (for blasphemy, there is only one punishment – decapitation).”

Pakistan’s draconian laws against blasphemy to promote islamisation of Pakistan are misused against religious minorities and to kill them. In most cases, the accused are lynched to death even before they are proven guilty in court.

Earlier, as reported by TFI, Pakistan stooped to a new low, when it charged an eight-year-old Hindu boy under the highly controversial blasphemy law. The child probably had to stare at the death penalty as the country’s law warrants such a punishment.

In another case where blasphemy law was used to settle scores against the minority populace, two Christian brothers in Pakistan were sentenced to death after they were charged with the blasphemy laws in 2018. The accused brothers had been convicted for the “use of derogatory remarks in respect of the Holy Prophet”, under the archaic blasphemy provisions of Pakistan’s penal code. Since 2011, a total of around 100 blasphemy cases have been registered in Pakistan. Moreover, around 40 people are waiting for the death sentence to be executed or are serving imprisonment for life.

Blasphemy is punishable by death in Islam. Therefore, non-Muslims face a constant threat to their lives. Freedom of expression has no place in Islam. The Quran curses those who commit blasphemy, and promises blasphemers humiliation in the hereafter. According to several hadiths, Muhammad ordered a number of enemies executed “in the hours after Mecca’s fall”. One of those who was killed was Ka’b ibn al-Ashraf, because he had insulted Muhammad. A variety of punishments, including death, have been instituted in Islamic jurisprudence that draw their sources from hadith literature.

The ‘Prophet’ declared that there shall be no punishment for murdering anyone who disparages, abuses or insults him. According to Sahih al-Bukhari, 4:52:270, Muhammad said, “Who is ready to kill Ka’b ibn al-Ashraf who has really hurt Allah and His Apostle?” Muhammad bin Maslama said, “O Allah’s Apostle! Do you like me to kill him?” He replied in the affirmative.

What we are trying to say is that there is no dearth of Islamic literature when it comes to supporting the idea of killing people who are simply accused, leave alone guilty of blasphemy. What has happened in Pakistan’s Sialkot might be gory and inhumane for the civilised world, but for Islamists, it is completely normal.