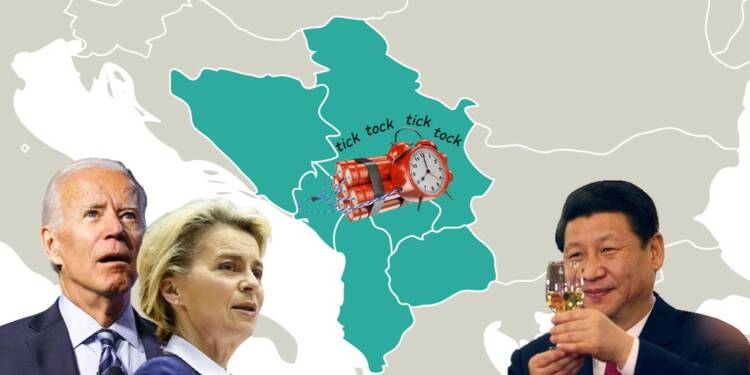 The Balkans are currently in the midst of a fresh wave of insecurity. Unresolved conflicts originating from Yugoslavia’s disintegration are, predictably, the deadliest flashpoints. In September, violence erupted in Kosovo over the most insignificant of issues: licence plates. In reaction to a policy requiring drivers entering Kosovo with Serbian plates to exchange them with temporary Republic of Kosovo plates or turn around, ethnic Serbs in Kosovo’s north staged a blockade. And as these things happen, China is well placed to exploit the situation to further entrench itself in the region, largely left abandoned by the US and EU.

Milorad Dodik, the Bosnian Serb leader, recently threatened to withdraw Serbian involvement from Bosnian governmental institutions. Most dangerously, this would imply the removal of Bosnian Serb forces from the national army, which had been built up with international help over the previous quarter-century, and the development of a Bosnian Serb-only force. As a result, the new high representative for Bosnia & Herzegovina warned that the country was on the precipice of violence. And in such a situation while things are heating up, the USA under Joe Biden and the EU are looking the other way.

A casual response from the US and the EU:

The European Union and the United States have dispatched envoys to help mediate talks and negotiate agreements in response to these situations, however, given the presence of China, a half-hearted approach by the US-EU combine will have no impact. The Balkans remain a territory in which the European Union and the United States can exert far more influence than they can elsewhere. Yet, more often than not, they have shied away from using their power, preferring bland professions of concern and meaningless pleas for discussion that have little impact on the situation on the ground.

As a result, with each new crisis, it becomes evident that the US and EU’s preoccupation on engagement is becoming increasingly out of touch with the changing nature of interstate relations. Rival governments are increasingly vying for dominance in the region, while internal limits on both sides of the Atlantic are stifling the possibility of a more ambitious regional policy. Both of these tendencies are unlikely to change in the near to medium term, implying that the West will not commit significant attention or resources to the region in the future.

The inaction of the US has provided China with a fertile ground to practice its neo-colonialism:

Because of the European Union’s limited military capabilities, it is far more difficult for it to prevent those seeking to destabilise the region or act when security begins to deteriorate. However, having more military assets has not made the US more effective. When Washington speaks, regional strongmen are more likely to pay attention.

As a result, it’s no surprise that the election of US President Joe Biden provoked reactions ranging from warm welcomes to routine animosity, depending on one’s position on US operations in the 1990s. But, despite pockets of interest in the Balkans in both the legislative and executive branches, the US has yet to make the region a priority. The Balkans have not been a priority for both US and even a non-influential European Union. It has increasingly transformed into a laboratory of the Chinese Communist Party’s neo-colonial experiments, right in Western civilisation’s backyard.

China has emerged as the most notable third actor in this portion of the European Union’s neighbourhood over the last decade. Beijing is expanding and embedding its footprint across the Western Balkans in a variety of sectors, while engaging with an increasing number of local actors, according to mounting evidence. The process looks to be speeding up at a time when Western consensus is forming on the threats presented by Beijing’s advances into the area.

In contrast to the EU, which takes a multilateral approach and imposes conditions in areas such as transparency, public procurement, fiscal rentability, rule of law, anti-corruption, and environmental protection, China appears to be a viable alternative with its supposedly no-conditionality strategy. A tangible example is a Chinese loan to Montenegro to build the Bar-Boljare Highway, which is seen as a method for the Montenegrin government to profit from the One Belt One Road programme. Considering Montenegro’s tiny size, the EUR 670 million loans represent 22 per cent of the country’s total foreign debt owed to China. Furthermore, the discussions were viewed as opaque, contracts were awarded to Chinese firms, and China required that any issues be resolved in Shanghai.

To further elaborate the extent of the politico-economic influence of China in the region, construction-material imports were exempt from taxation. China also bought Smederevo Steel Manufacturing in Serbia and built Belgrade’s Pupin Bridge. Another major project in Serbia is the Belgrade-Budapest railway, which, when combined, makes Serbia China’s most important regional partner. In Albania, Geo-Jade Petroleum, a privately held Chinese business, purchased Bankers Petroleum, the country’s largest oil producer. BiH and North Macedonia have also made significant investments in infrastructure and the energy industry.

And it is just the beginning, with the situation worsening, the regional abandonment of Balkan by the US and the EU will make sure China can create a region full of instability and infighting, making it a ticking time bomb for the world.