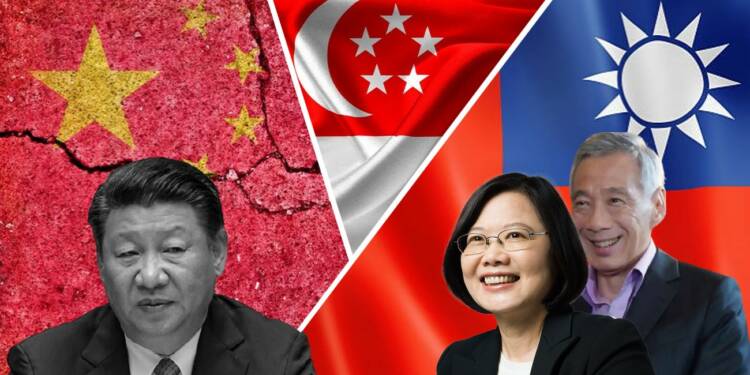 If there is one expression that the Chinese President and officials use on an everyday basis, it has to be the ‘One China’ policy. Every time someone visits Taiwan or even converses with a Taiwanese leader, Xi goes crazy and China starts giving threats of serious consequences.

China says that if you befriend Taiwan, we will punish you. But a small island city-state in Southeast Asia- Singapore has shown the guts to abandon China and support Taiwan, despite Xi’s threats. So, why has Singapore suddenly started antagonising China? And what does it want to achieve by befriending Taiwan?

Taiwan and Singapore have resumed military cooperation earlier this week. Singaporean troops were stationed at a Taiwan Army base in Kaohsiung’s Fengshan District. According to UDN, they carried out parachute training on Monday at the Chaochou landing field in Pingtung County.

In 2019, the two countries signed the “National Defense Exchange and Security Cooperation Agreement” to expand defence cooperation all over again. But the COVID-19 Pandemic delayed things and when Singapore began exchanges with the Chinese People’s Liberation Army (PLA), Taiwan suspended military cooperation with the island city-State.

Now, let’s dive into the history of Taiwan-Singapore relations. If you are surprised by Singapore’s decision to embrace the island nation, you need to know the history of the two countries.

You probably already know that Singapore is a young country that gained independence from Malaysia only in the year 1965. As an independent nation, the island city-state sought to establish ties with Taiwan, or the Republic of China (ROC) and not the People’s Republic of China (PRC).

Singapore, as a small country, had to protect itself from much more populous and bigger countries in the region- Malaysia and Indonesia. In the 1970s, the city-State started building the Singapore Armed Forces (SAF).

Now, since Singapore is a very small country with a real scarcity of land, Taiwan pitched in with timely assistance and provided training areas to Singaporean troops. Singapore recognised the island nation for a long period- till 1990 to be precise. Even after island city-state recognised the PRC in 1990, Singapore-Taiwan relations didn’t turn sour immediately.

Relations did turn bitter-sweet after the late 90s. Mostly, it was Beijing that tried to play spoilsport and impair Taiwan-Singapore relations. But the two island countries have always maintained some kind of friendly relations.

Why Singapore is supporting Taiwan:

Where does China’s expansionism stop? Well, it will stop only when China runs short of the territory that it can possibly acquire. Singapore understands how China is a big, cruel giant that wants to gobble up smaller players.

Today, Xi says that he wants Taiwan. But if you look at it objectively, even Singapore has a China problem. The island city-state is a country of immigrants, with ethnic Chinese constituting nearly 75 percent of its population of 5.6 million.

And how could an ever-expansionist China not weaponize Singapore’s ethnic Chinese composition? China has been actively evoking mainland Chinese nationalism inside Singapore. Over the past one year, Chinese property purchases, which has seriously strained Singapore’s limited land resource and has pushed property prices even further.

Singapore understands that China wants to do to it, what it is doing to Taiwan right now. Xi thinks he can simply mount Chinese influence in Singapore to the level that Beijing will start asserting complete control in the city-State. Yet, Singapore is not going to relent, and this is why Singapore is befriending the island nation all over again.

Singapore is warning Xi Jinping- if you don’t stop troubling us, we will put all our weight behind Taiwan.

Everything you need to know about PA Milesplit