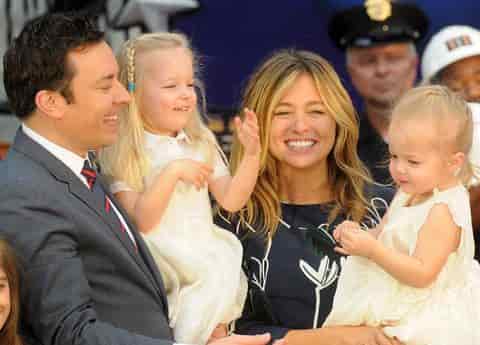 Frances Cole Fallon and her sister Winnie Rose were born through gestational surrogacy. A gestational carrier, also known as a gestational surrogate, is a woman who carries and delivers a child for the benefit of another couple or individual (intended parent). The eggs used to generate the embryos do not come from the carrier when using a GC.

James Thomas Fallon is an American comedian, television personality, and actor who was born on September 19, 1974. He is most known for his appearances on Saturday Night Live and as the host of the late-night talk show The Tonight Show Starring Jimmy Fallon and, before that, Late Night with Jimmy Fallon.

Fallon grew up with a passion for comedy and music, and at the age of 21, he relocated to Los Angeles to seek stand-up comedy possibilities.

In 1998, he was tapped to join the cast of NBC’s Saturday Night Live, achieving a long-held ambition. Between 1998 to 2004, Fallon continued on SNL for six years, co-hosting the program’s Weekend Update section and became a star in the process.

After a successful film career, Fallon returned to television in 2009 as the host of NBC’s Late Night with Jimmy Fallon, where he became noted for his emphasis on music and video games. In 2014, Jimmy left that show to become the sixth permanent host of NBC’s long-running The Tonight Show.

Aside from his work on television, Fallon has released two comedy CDs and seven books, the most of which are geared at youngsters.

Nancy Juvonen Fallon is a film producer from the United States. Flower Films is her and Drew Barrymore’s production firm. Juvonen grew up in Mill Valley, California, after being born in Connecticut.

She is the daughter of aviation business executive William H. Juvonen, a Stanford University alumnus and former Marine aviator, and Pam Juvonen, and is of Finnish origin. Juvonen earned a bachelor’s degree in sociology and cooperative education from the University of Southern California.

On December 22, 2007, Juvonen married Jimmy Fallon, the host of The Tonight Show. They met on Saturday Night Live’s stage. In August 2007, Fallon proposed to Nancy on the pier at sunset at Nancy’s family home in Wolfeboro, New Hampshire, with a Neil Lane-designed engagement ring. Four months later, they married. Winnie Rose, born in 2013, and Frances Cole, born in 2014, are their two children. Both were born through gestational surrogacy.