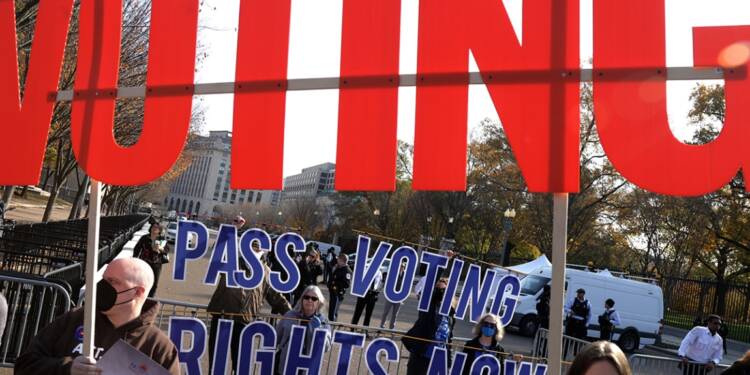 Democrats are trying their tested agenda to push back the GOP- use threats and compel the Republican lawmakers into compliance.

The Senate is presently even divided, which allows the GOP to obstruct Joe Biden’s legislative agenda. They are insisting the Republicans to finally let the Biden administration take up the John R. Lewis Voting Rights Advancement Act.

Republicans have used the filibuster twice to block discussions on the voting rights bill.

What is the Filibuster

So, you might be wondering what filibustering a bill really means? As per the website of the United States Senate, the filibuster is “a loosely defined term for action designed to prolong debate and delay or prevent a vote on a bill, resolution, amendment, or other debatable question.”

The website further states, “Prior to 1917 the Senate rules did not provide for a way to end debate and force a vote on a measure. That year, the Senate adopted a rule to allow a two-thirds majority to end a filibuster, a procedure known as “cloture.” In 1975 the Senate reduced the number of votes required for cloture from two-thirds of senators voting to three-fifths of all senators duly chosen and sworn.”

With increasing partisanship and political polarisation in the United States of America, the filibuster has been used again and again by the opposition to slow down the ruling administration’s legislative actions and nominations. Even the Democrats had used the Filibuster to hurt the Trump administration.

When Biden came to power, the Democrats got a dose of their own medicine. GOP leaders actively used the filibuster to stall dozens of President Joe Biden’s nominees from being confirmed across different departments.

Since then, Democrats have been continuously arguing in support of doing away with the filibuster. Last year, Senate Majority Whip Dick Durbin, an ardent supporter of filibuster abolition, said, “We have to change something. It’s another way for Republicans to shut down the Senate.”

Sen. Elizabeth Warren too said, “The Republicans have exploited every twist and turn in the rules to try to keep people from getting into the jobs so they can do the work that needs to be done.” She also called GOP blockades “obscene”.

So, what the Democrats really want to do is to eliminate the filibuster, though they had themselves used the tactic actively to irk Donald Trump when he was in power.

Now, Democrats are going as far as bullying the Republican lawmakers. They are telling the GOP that if the voting rights bill is obstructed again, then they will eliminate the filibuster altogether. Senate Majority Leader Chuck Schumer has even acknowledged growing frustration with regard to Senate’s inability to discuss voting rights.

So, the Democrats are telling the GOP- let us get the voting rights bill through or you lose the filibuster forever. Democrats believe that the Republicans will bow down, especially because 10 years ago, they had used the same strategy to push Barack Obama’s agenda and nominees.

This is exactly how Democrats have managed to push through Obama’s nominees like the director of the Consumer Financial Protection Bureau, secretary of labour, and Environmental Protection Agency administrator in 2013.

Now, Democrats are again forcing GOP into surrender. And the Republicans need a strong leader to say a loud no and push back against Democrats’ threats. And as of now, there is no one except former President Donald Trump, who can help GOP withstand all the pressure coming from the Democrats.

So what can Trump do?

President Trump may be down but not out. His domineering control over the GOP has been well established. Republicans do what Trump and giving an easy passage to the Voting Rights bill is not something Trump wants.

So Despite Schumer’s threats, Republicans, in all probability, will filibuster the bill leaving Democrats sad and broken. Democrats may try to abolish the filibuster to get the bill through but the political cost of it will be too high for them. It will be giving Donald Trump the opportunity that he has been waiting for.

Filibuster is an essential part of America’s democratic ethos, it ensures that the party in power doesn’t misuse its power. And abolishing the filibuster will break the foundational stone of America’s democratic setup. Trump will have a valid reason to lead Republicans to boycott the session and even enthuse Republican voters to protest against Joe Biden’s “fascism”.

America has never been so divided before. America has never been so polarised before. With the BLM-Antifa charade and the January 6th movement, the oldest democracy of the world is already at the verge of breaking down. It took a Donald Trump for the silent majority of the country to find its lost voice and with Trump leading them against fascism in the name of democracy, the majority can wreak havoc.

Democrats have a choice between order and chaos, democracy and fascism, Trump’s sullen silence and Trump’s wrathful outburst, a voting rights bill and a civil war. Regardless of their warnings and bravado, It’s not going to be so easy for the democrats.