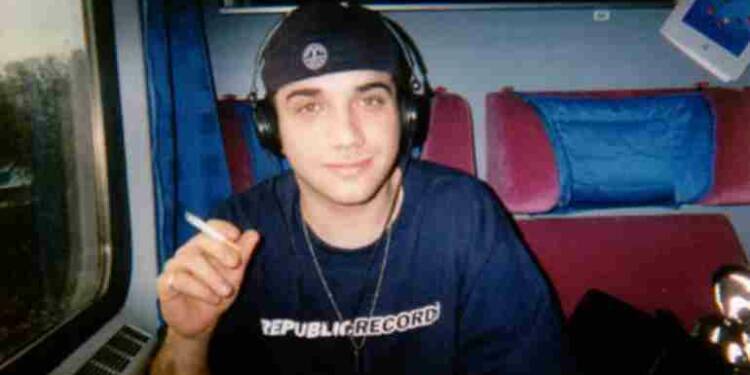 Jimmy pop Ali is a former American singer, rapper, musician, and composer. While his birth name is James Moyers Franks, Jimmy Pop is his stage name. He is best known for his great vocal, guitarist, songwriter, and also one of the founding members of the comedic rock band “Bloodhound Gang”.

Jimmy’s twitter account can be reached at @jimmypop and has been followed by only over 28k people. He is quite active on the platform and tweets frequently.

Jimmy Pop Ali was born on 27 August 1972 in Trappy, Pennsylvania, United States of America. His parents’ names are Alice Ann and Richard Lee Franks. He is of German and Native American Heritage with the Jewish religion.

He completed his graduation from Perkiomen Valley High School in 1990 which is a school district based in the central Montgomery provinces, Pennsylvania in the United States of America. He had studied in mass communication and history at Temple University in Philadelphia, Pennsylvania where he met his partner Jared Hennegan who is also a member of the comedic rock band “Bloodhound Gang”. Jared Hennegan is known as Evil Jared Hasselhoff who is an American musician, songwriter, and television mediator.

Early life and Careers in Music, acting and films:

Jimmy Pop Ali had started his music career in the first band with Depeche mode which was an electronic band, it is also known as Bang Chambers 8 with Mike Bowe, later known as Daddy Longlegs. He was playing guitar while Mike Bowe played bass and sang. The Bang Chambers 8 released four original cassettes such as Ice Cubes, birthday boy, and war chimneys which were nothing in common with the Bloodhound Gang. But the war chimneys were about the gulf war which is also known as Operation Desert Storm.

In his music career, the Bloodhound Gang was the turning point of his success. The Bloodhound bang was an American rock band as a hip hop group before starting into other genres which included punk rock, hip hop, rapcore, funk metal, and electronic rock, and formed this band in 1988. This band became very popular and famous in later years as well as they could sell their albums for millions of dollars and many awards.

Jimmy Pop Ali had started his acting career in Clam Kill Yourself which is a video series produced by Bam Margera and Brandon Dicamillo and other residents of West Chester, pansivalanya, United States of America. He had also made an appearance in Viva la Bam. It is an American reality television series starring Bam Margera and his family. After that, he also acted on the Dudesons, a stun comedy group that is best known for its tv shows and performances.