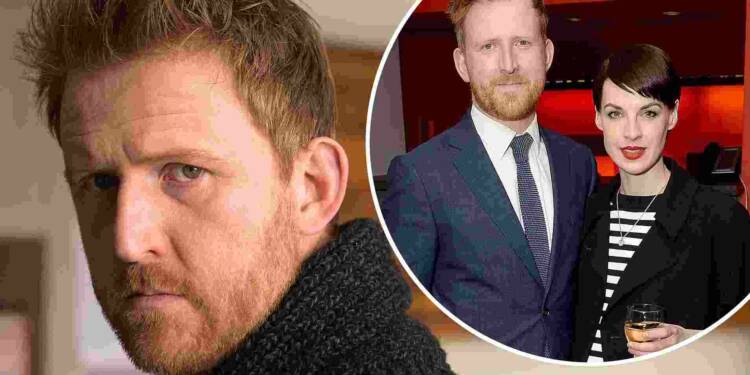 Birthplace and family of Tom Goodman-Hill

Tom Goodman-Hill was born on 21 May 1968 in Enfield, London, United Kingdom. Tom has married two women, the first wife’s name is Kerry Bradley who has less information in the sources. They had two children. In 2013, it declared that the couple got separated.

At that time he had an affair with his second wife Jessica Raine. Jessica Ranie is also an English British actress in the United Kingdom and she is known for her role as Jenny Lee in the television series called the Midwife and Verity Lambert in the television film an adventure in space and time.

In 2010 they met at the national theater production of the earthquake in London. Tom and Jessica got married on 30 August 2015 and had a son in 2019. They are still together or not, this information is not available on the sources.

Tom Goodman-Hill has completed his graduation in Drama and English with a teaching qualification from the University of Warwick which is a public research university on the outskirts of Coventry between the west Midland and Warwickshire in England, United Kingdom. During his graduation, he participated in an active role in student drama. He spent a year as a substitute teacher in Coventry before moving to London to pursue an acting career.

Early life and careers in the film, television, theater, and radio

In his early life, before moving to major lead careers, he had regularly been active in performing at the people’s theater which is an amateur theater in Newcastle upon Tyne, England, United Kingdom. After that, he came to London to pursue acting

The League of extraordinary gentlemen( 2003)

His main film career landed in 2003, he played Sanderson Reed opposite Sean Connery in the movie “The League of Extraordinary gentlemen. It is a dieselpunk superhero film based on the first volume of the comic book series of the same name by Alan Moore and Kevin O’Neill. It was released on 11 July 2003 in the United States of America and on 17 October 2003 in the United Kingdom.

The Imitation Game is an American historical drama film and it is directed by Morten Tyldum and written by Graham Moore. This movie is based on the biography of Alan Turning: The Enigma by Andrew Hodges. Tom had played the role of Sgt. Stahl.

Tom Goodman-Hill played the role of Neal Beidleman in the movie Everest which is directed and produced by Baltasar Kormakur and written by William Nicholson. It is a historical survival adventure film of 2015.

Rebecca is a British romantic thriller film which is directed by Ben Wheatley from a screenplay by Jane Goldman, Joe Shrapnel, and Anna Waterhouse. Tom had played Frank Crawley in this film.

Humans is a science fiction television series that debuted on channel 4. He is known for his role as Joe Hawkins in these series.

He played PC in ideal. It is a British dark comedy television series which is broadcasted on Tv channel BBC three.

There are many drama series of Tom Goodman-Hill who played fantastic roles in his respective drama series, such as Jonathan Clerk, Murder in Mind, Hustle, Doctor Who, The office, Broken news, Goodnight sweetheart, Lewis, the Devil’s whore, spy, Mr. Selfridge, The thirteenth tales, call the midwife, Foyles War, Inside no 9, cheat and so on.

Tom Goodman-Hill had started his initial professional career in theater.

It is a stage play about British Beyond the Fringe comedian Peter and Dudley Moore which was written by Chris Bartlett and Nick Awde. Tom had played the role of Peter in this theater.

In 2017, he appeared as David’s Owen in Limehouse at the Donmar Warehouse.

He was a patron of Scene and heard of a British registered charity that operates as a mentoring project for inner-city children in Somers Town, London, UK.

Tom has played various roles in several BBC Radio 4 productions such as witness: five plays from the Gospel of Luke, Anton in the house of Milton Jones, another case of Milton Jones and thanks a lot, Milton Jones, Ron the security guard in self-storage, Archie in the three series of hut 33, mason in my first planet, etc .

He has received the Laurence Olivier Award nomination for the best performance in a supporting role in a musical for his performance as Sir Lancelot.