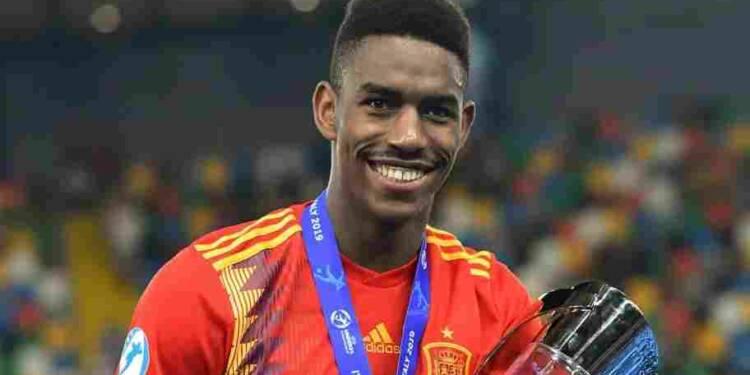 Héctor Junior Firpo Adames, also known as Junior Firpo or simply Junior, is a professional footballer who currently plays as a defender for Leeds United in the Premier League. He is mostly a left-back, but he also has the ability to play as a centre-back or right-back. He was born in Santo Domingo, Dominican Republic on August 22, 1996.

Junior can be reached at twitter at @JuniorFirpo03 and has been followed by over 197k people. He is quite active on the platform and tweets frequently.

Junior Firpo has not married yet. He is, however, in a relationship with Julia Torralbo, his lovely girlfriend. There are two children in the family: a boy and a girl.

There is no data that is completely reliable about his net worth. However, there is some information about his wealth. Junior Firpo makes a living as a professional football player. Contracts, salaries, bonuses, and endorsements are all sources of money for him. In 2019, he signed a five-year contract with Barcelona for €18 million with €12 million in add-ons. His projected net worth is €26 million as of 2021, with a salary of €5 million and a market value of roughly €25 million.

Despite being born in the Dominican Republic, he has lived in Spain for the majority of his life and is a dual citizen of the two nations. He played the whole second half of the Dominican Republic senior national team’s 0–6 non-FIFA friendly loss to the Brazil Olympic squad on October 9, 2015.

Junior was called up to Spain’s under-21 team on August 31, 2018, for two 2019 UEFA European Under-21 Championship qualification matches against Albania and Northern Ireland. On September 7, he made his debut, starting in a 3–0 triumph over the former.
Real Betis

Junior Firpo, who was born in Santo Domingo, came to Benalmádena, Málaga, Andalusia, when he was six years old and joined Real Betis’ junior setup in June 2014, when he was 18 years old, from Puerto Malagueo. On February 15, 2015, he made his senior debut with the reserves, starting in a 1–1 home draw against Granada B in Segunda División B.

Junior Firpo was clearly promoted to the B-side ahead of the 2015–16 season, and he appeared on a regular basis during the season, which ended in relegation. He made his senior debut on April 17, 2016, when he scored the third goal in a 4–0 away win over Algeciras.

Junior’s contract was extended until 2021 on August 1, 2017, after completing the entire preseason with the first team. The following 12 February, he made his first team – and La Liga – debut, starting in a 1–0 away defeat against Deportivo La Corua, becoming the first Dominican Republic-born player to appear in La Liga. Junior Firpo scored his first professional goal on March 17, 2018, in a 3–0 home victory over Espanyol.

He agreed to a contract extension until 2023 on August 19, after being promoted to the main team.

Junior Firpo signed a five-year contract with Barcelona on August 4, 2019, for €18 million plus €12 million in add-ons. Three weeks later, he made his debut in a 5–2 home win over his previous club Betis, replacing Rafinha for the final nine minutes.

Junior scored his first and second goals for Barcelona in a 2–0 win over Getafe on September 28. In a 3–1 group stage victory over Borussia Dortmund on November 27, he made his UEFA Champions League debut. Junior Firpo scored his second (and only) goal for Barça in a 5–1 home triumph over Alavés on February 13, 2021.

Junior Firpo signed a four-year contract with Premier League team Leeds United on July 6, 2021, for a sum of €15 million plus add-ons, with Barcelona holding 20% of his future sales. After Ezgjan Alioski’s contract expired, he was anticipated to replace him at left defender, and he made his debut for the club in that position on 14 August in the second half of the season opener at Old Trafford, where he came on as a tactical substitute for Rodrigo in a 5–1 defeat.