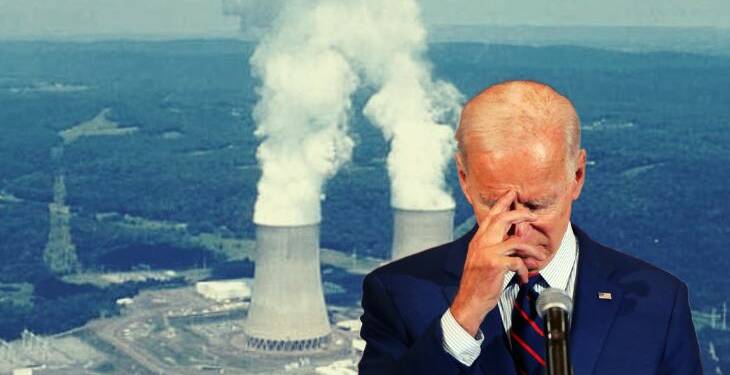 Most of the large economies in the west are suffering from the energy crisis. High demands and low supplies have resulted in fuel inflation in the EU and even in the US, gas prices are shooting up. As if this was not enough of a predicament, now sanctions loom over the Russian uranium sending American nuclear plants in a tizzy.

Reuters reported that, amid escalating tensions between the US and Russia, US power corporations are pressing the Biden administration not to prohibit Russian uranium shipments, arguing that it is critical to keeping local electricity cheap.

To put it into perspective, fifty percent of U.S. nuclear power plants are fueled with uranium from Russia and its allies, Kazakhstan and Uzbekistan. This translated into approximately 10.3 million kilograms in 2020, producing 20% of the electricity consumed by Americans.

Uranium is required for nuclear power reactors to generate electricity. Inside the reactors, it is utilised as a fuel to boil water and generate steam to power the turbines. If uranium is included in the wave of sanctions against Russia, imports of the precious metallic chemical element will become difficult. As and when this happens, the availability of low cost electricity for US consumers, would be jeopardised.

While uranium imports have so far been spared from White House sanctions on Russia, the possibility of it making into the list is increasing with every passing day. The impact would be so catastrophic that, the National Energy Institute (NEI), which represents the nuclear industry in the United States and includes Duke Energy Corp and Exelon Corp, is urging the Biden administration to keep the exemption.

Slow actions to replace this dependence

Although Texas and Wyoming have substantial uranium reserves, the United States does not currently process it, therefore it is entirely reliant on imports, particularly Russian uranium because it is the cheapest.

“While Russia is a significant global supplier of commercial nuclear fuel,” said NEI’s senior director of fuel and radiation safety, “US utilities contract with a worldwide network of companies and countries for their fuel requirements to mitigate the risks of potential disruption.” Although, the government body is trying to show that there will not be any significant impact; the fact that NEI is urging to keep Russian Uranium exempted, tells the reality.

Democrats agreed in 2020 with former President Donald Trump’s proposal to expand nuclear development in the United States by building a uranium reserve, for which he suggested a budget of $150 million. However, the process has not been taken up with utmost priority as no one expected things would escalate fast.

According to Reuters, while the Biden administration claims to be working to keep U.S. energy costs down, an unnamed White House official said that all inquiries from the energy industry are being heard.“ The American people are already suffering from inflation, and a relatively vulnerable economy. In such a scenario, any volatility in electricity prices will negatively impact US citizen manifolds. Realising this, American nuclear plants are strongly rejecting any possible sanction on Russian Uranium.