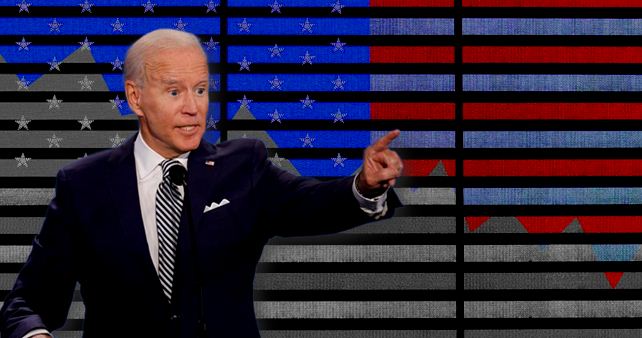 There is no denying that Americans are currently reeling under the worst inflation situation of all time. The average price for a gallon of gasoline hit $4.104 on Monday, a new record high surpassing the 2008 record of $4.103.

On Sunday, crude oil prices surged to a record-high of $130 per barrel on the prospect for a full embargo of Russian oil and products. And now the situation is only going to exacerbate as Joe Biden announces a blanket ban on all energy imports from Russia.

Putin- the new sacrificial lamb for Joe Biden and company

Before the onset of the Russia-Ukraine crisis, Democrats would pin the blame of heightened inflation on Covid or throttled supply chains. And now, they have found a new sacrificial lamb in Russian President Vladimir Putin.

They are rebranding the rise in gas prices as #PutinPriceHike! President Joe Biden announced on Tuesday that rising gasoline prices is the cost that America has to pay to defend freedom. Biden said, “This is a step that we’re taking to inflict further pain on Putin, but there will be costs as well here in the United States.”

Biden’s bootlickers couldn’t agree more! CNN Business and Politics correspondent Vanessa Yurkevich said Tuesday that people are “okay” with paying high gas prices if it “holds Russia accountable.” A narrative is being propagated that labels you as unpatriotic if you are livid at the rising inflation.

Why is the US so oil-starved nation?

Frankly speaking, the Biden administration’s ill-thought and short-sighted foreign policy is the root cause of inflation in America. Today, the US is at loggerheads with every major oil-producing nation on the earth. Be it Arab nations, Iran, Venezuela or Russia, no one seems to be on amicable terms with Washington DC.

Under former President Donald Trump, the US vehemently backed its local oil-producing industry that had made the nation energy independent. But Biden’s green agenda derailed this hard-earned momentum. Biden axed the Keystone pipeline project just days after his enthronement in the White House.

Similarly, Biden killed the fracking industry. He ordered a moratorium on new oil and gas leases on federal land and water areas within days after assuming charge at the Oval office. And since no major oil-producing nation is willing to give the 79-year-old president some respite, the US is on its way to becoming the world’s most oil-starved nation.

Why Biden’s blanked ban on Russian oil is stupid?

And that’s why Biden’s ban on Russian oil looks stupid. Even the UK, which has been the front-runner in attempting to punish Russia, has refrained from immediately banning oil imports from Russia. The Boris Johnson government said it will phase out its oil dependence on Russia till the end of this year.

Make no mistake, the U.S. imported 73 million barrels of oil or 8% of its total oil imports from Russia in 2021. This business with Russia could come as a big relief to American consumers even as its purging is hardly going to impact the Russian economy.

Major economies like China and India are in no mood to give up heavily discounted oil purchases from Russia. So, it won’t be a tedious task for Russia to get rid of its dependence on the US oil market. But for the oil-starved US markets, losing access to Russian oil imports is indeed a big deal.

Biden knew this. Hence, he was unwilling to axe the oil supplies from Russia. That’s why it took him two weeks after the invasion to announce the shunning of Russian imports as he saw no viable alternative to replace Russian oil with.

Cost that Americans are paying for Biden’s foolishness

And paying the price for Biden’s foolish energy policy are America’s innocent taxpayers. According to Yardeni Research, increased oil costs suggest the average American household will pay almost $2,000 more for gasoline in 2022. Edward Yardeni, the president of the firm, wrote on LinkedIn, “We estimate that the average household is currently spending at least $1,000 more on food as a result of rapidly rising grocery prices.”

He further said, “That’s $3,000 less money that households have to spend on other consumer goods and services, which also are experiencing rapid price increases.” Economists say that Biden’s Build Back Better agenda would further aggravate the inflation problem due to increased focus on green energy despite lack of infrastructure.

All in all, Biden’s attempts to punish Russia are stripping Americans of their savings and high living standards. Prolonged inflation amid fears of stagnation in the economy could very well lead America to another 2008-like economic recession that will dismantle the US economy beyond repair.