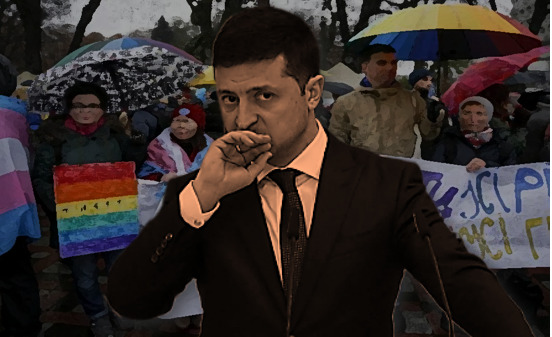 The Ukrainian government on a new has barred transgender people from leaving the country, whereas millions of other women and children flee to Poland and other European countries on a daily basis. Instead, Ukrainian border guards are reversing their decisions and forcing them to return home to fight. Some trans activists in the West may be turned off by their logic: Ukraine’s martial law mandates that all biological males aged 18 to 60 stay in the nation and fight. There are no exclusions for transgender women.

However, it is not just the transgenders, but many others have also been facing discrimination by the Ukrainian authorities. Far-right vigilante groups have run rampant around the country in recent weeks, tying people to poles and then beating and humiliating them, as the country enters its fourth week of a calamitous war with Russia.

In multiple films, ordinary Ukrainian Armed Forces troops are seen tying up and assaulting people of minority Romani people, implying that legal and civil rights have been effectively abandoned in a country that is ostensibly a pinnacle of European “democracy” in comparison to the “totalitarian” Putin administration.

Origin of the discriminated Romani people

Roma, singular Rom, often known as Romany or Gypsies (a derogatory term), is an ethnic group of traditionally nomadic people who originated in northern India but now dwell worldwide, primarily in Europe. The majority of Roma speak Romany, a language closely connected to modern Indo-European languages of northern India that is also the primary language of the country where they inhabit.

Roma groups are thought to have departed India in multiple migrations, arriving in Persia in the 11th century, southeastern Europe in the 14th century, and western Europe in the 15th century. While these people have been historically discriminated against, it has continued and come to light with the latest instances in Ukraine.

Far-right social media accounts in Ukraine have widely shared shocking videos of this “flogging.” Children, as well as members of the Sinti and Roma minorities, are among the victims. In addition to being wrapped in plastic and tied to a pole, victims of such humiliating treatment had their pants pulled down and beaten by passersby or the Ukrainian Armed Forces. Some have green or blue paint on their faces as well.

In another news, a person named Tarnavskyi was recognized as an Azov member for publishing racist content about Roma people, as well as a photo of himself extending his arm in a Nazi salute. The Ukrainian government openly backed and incorporated vigilante movements into the state. Poroshenko’s government established a National Militia in 2018, tasked with monitoring the streets and weeding out “criminal” activity. And this criminal activity is obviously to torment the Romani people and other such sorry minorities.

No place for transgenders

Hundreds of trans women are said to have attempted to cross the border since Ukraine proclaimed martial law on February 24. Many people have been turned away. Trans activists who talked with both papers warned that trans persons have an incentive to emigrate since they would be persecuted if Russia took control of the country.

Ukraine is ranked 39th out of 49 European countries for its overall treatment of LGBTQ+ individuals, according to the International Lesbian, Gay, Bisexual, Trans, and Intersex Association. In the country, gay marriage is prohibited, and homosexuality is considered a sin by the Christian Orthodox Church. In addition, there is no anti-discrimination legislation in place to protect LGBTQ+ people.