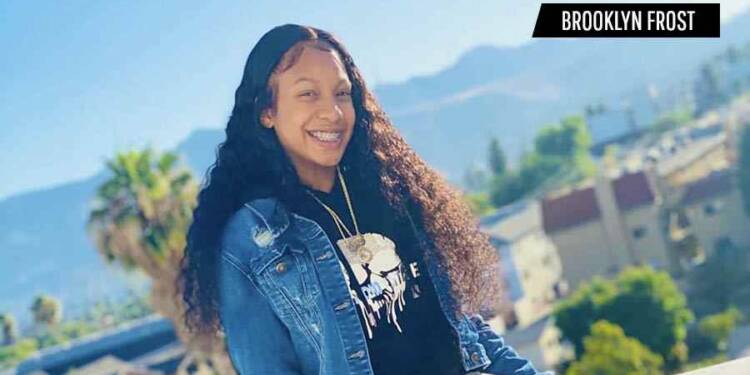 Brooklyn Frost is an Instagram star, YouTube content creator, comedian, and social media influencer of African descent. Despite the fact that she has only recently begun her social media journey, she has already made a name for herself. In this article we are going to talk about the biography, career, notable works, and family of Brooklyn Frost so read the full article here.

The popularity of her older brother Deshae inspired some of this. Deshae Frost is a well-known stand-up comedian who is also known for his YouTube comedy videos. He also has a sizable following across various social media platforms. Brooklyn was first introduced to the YouTube world by Deshae, who featured her in one of his early vlogs.

Since then, she’s appeared in a number of his most famous videos, including “My Sister Plays A Hickie Prank On Me!” and “My Sister Plays A Hickie Prank On Me!” I Accidentally Broke Her Phone!! A must-see! ‘Guy Flirts With My Sister In Front Of Me Prank!’ and ‘Vlogmas 3′ 12’ Vlogmas ‘My Room Is Finally Finished! *Mel Mel Interrupted My Video*’ is one of Brooklyn Frost’s most popular videos. as well as ‘Get Ready With Me.’ Brooklyn is on her way to social media stardom, with an ever-increasing number of fans.

Brooklyn Frost was born in Seattle, Washington, on August 17, 2004. Monique Carrillo is her mother’s name. Deshae Frost (born January 9, 2001) and Amare Frost are her two brothers (born June 10, 2003). Although he was featured in one of Deshae’s prank films, their father’s name has not been exposed on social media. Their parents are divorced, but they are raising their children as a family. Brooklyn is a student at the University of Washington in Seattle. Christian Green has been her boyfriend since 2018. She considers herself to be a fervent Christian.

Brooklyn Frost’s fame grew when she began to appear in more videos on her brother’s YouTube channel. The amusing pranks she was playing on her brother demonstrated her and Deshae’s great sense of humour. ‘Dead Sister Prank On Brother!! Extreme! Vlogmas 22’, ‘Sister Messes Up My 600$ Gucci Shirt During A Mukbang! *I Was Heated*’, and ‘Gave My Sister A Makeover For National Siblings Day!’ catapulted her to new heights. It was becoming clear to both siblings that Brooklyn needed her own channel at this time. Fans had been requesting her own channel for quite some time, and it was past time to give in.

On March 3, 2019, Brooklyn Frost launched her eponymous YouTube channel and published her first video. The video, titled ‘My First YouTube Video! *Get To Know Me*,’ received over 380K views almost instantly.

Brooklyn Frost has amassed more than 420K YouTube subscribers since her debut. Her YouTube videos have been seen over 3.7 million times. This is partly due to videos including her younger brother Mel Mel, such as ‘I Did A Curly Hair Routine On My Brother! *he didn’t enjoy it!’ With over 1.1 million views, the video is still the most popular on her channel. ‘Me And Kye Have Girls Day *We Talk About Nipsey Hussle R.I.P*, ‘Im Back In Seattle *Vlog* I Drove The Escalade!’, and ‘I Messed Up My Brother’s Gucci Shoes’ are among her other most popular videos. Meanwhile, she continues to make appearances in her brother’s videos.

All of this has helped her earn notoriety and a sizable social media following. It’s no surprise, then, that Brooklyn Frost has thousands of Instagram followers. On February 22, 2019, she published her debut post. Since then, she has continued to post’selfies’ and fashion updates, which has increased her popularity among her followers.

Perhaps it’s because of her wit, sense of humor, and relatable humble attitude that her social media following continues to grow. Deshae, on the other hand, is kept protected from the temptations of internet celebrity thanks to her mother and brother’s continual monitoring.

We hope this biography article of Brooklyn Frost will be helpful for you to understand her journey and works.