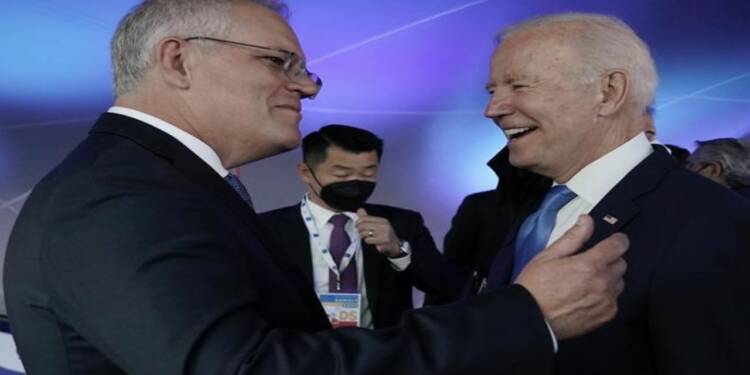 Australia was to be equipped with nuclear-powered submarines for the first time under the AUKUS accord, which was agreed last year between Australia, the United States, and the United Kingdom in an effort to deter China. But the deal went into a deep slumber as soon as it was finalized.

And now, after a period of stagnation, some activity can be detected. As part of their new AUKUS trilateral security pact, the UK, US, and Australia claimed they are working on creating hypersonic missiles, a military capability that Russia has previously employed in Ukraine.

But the fascinating question is why now? Why the sloth is up at this point from its slumber?

Let me try to answer this question.

Return with me to September 2021. The sudden revelation of AUKUS  was possibly the most momentous development in Australian defence and foreign policy in a generation, and it has sparked a frenzy of study since then.

Now, AUKUS is a three-way information and technology sharing agreement that brings into sharp focus the perceived scale of the threat posed by China and puts an end to the increasingly untenable question of Australia hedging its bets. It includes a first-time commitment by the US to share nuclear propulsion technology with an ally other than the United Kingdom.

The AUKUS agreement has been severely harmed by the Russian-Ukraine crisis. Because of Biden’s naiveté, China appears to have been forgotten, and the entire focus has shifted to Russia.

Biden is feverishly trying to subdue Russia in whatever way he can, mobilising leaders all across the world to oppose Russia. Australia, as a US ally, is expected to take up the fight against Russia.

This had put Australia in a difficult position. Australia sees Russia as a non-existent threat. Much of Australia’s concern stems from China’s rise in the Indo-Pacific region.

China’s militarization of three islands in the South China Sea, as well as its security arrangement with the Solomon Islands, caused concern in Australia.

As a result, Australia’s ability to contain China is critical, and a weakened AUKUS is clearly not in its best interests.

Canberra has devised a wonderful plan. It has promised Biden of its backing against Russia, which he badly wants to punish, but this assurance comes at a price.

Australia can’t afford to overlook the threat that China’s presence in the region poses.

Australia has thus requested for America’s help in managing the Chinese threat in exchange for providing support to the US against Russia.

This could very well explain the recent AUKUS hypersonic missile agreement between Australia, the UK and the United States.

UK Prime Minister Boris Johnson, US President Joe Biden, and Australian Prime Minister Scott Morrison stated in a joint statement that they were satisfied with the progress of the programme for conventionally armed, nuclear-powered submarines for Australia and that the allies will cooperate in other areas as well.

“We also committed today to commence new trilateral cooperation on hypersonics and counter-hypersonics, and electronic warfare capabilities,” the statement said.

Scott Morrison’s brilliance has thus resurrected an otherwise dormant deal. Biden has learned the hard way that he can’t rule the world according to his own wishes. The interests of the allies must be accommodated. After all, friendship is a two-way street.