Good News: US budget deficit is falling; Bad News: This happened due to a ‘fraud’ 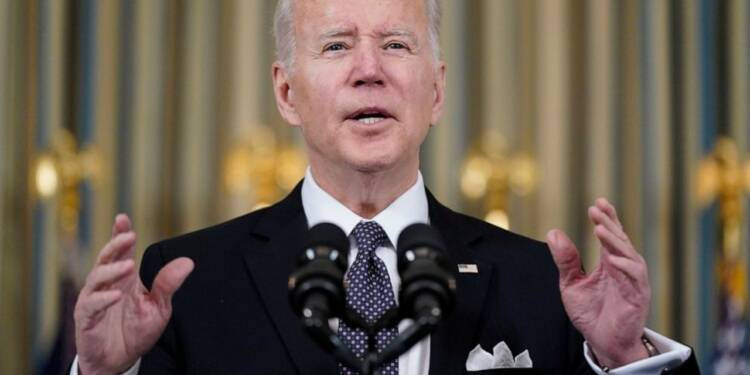 Recently, American President Joe Biden released a $5.8 trillion budget request for fiscal 2023 that aims to reduce the budget deficit. President Biden praised his administration and mentioned his deficit-reduction efforts in a statement, saying his policies would further reduce the gap through “economic growth that has increased revenues and ensuring that billionaires and large corporations pay their fair share.” The budget deficit in the US is going down. The white house claims this is the largest decline in US History. But sadly, it has gone down from an all-time high of $3.13 trillion in 2020 to $2.77 trillion.

Yes, the US budget deficit is shrinking, which is good news. However, how it is reduced is concealed behind a smokescreen. Biden claims that it’s because of his policies. The reality, on the other hand, is quite different.

Many budget experts argue that the reason the deficit is shrinking is due to the termination of economic schemes by the POTUS.

The Covid-19 pandemic has engulfed the United States, just like the rest of the world, over the past two years. As a result, the US government embarked on a number of efforts in order to keep the economy afloat. The immunisation programme is a good example of how policies are being phased out. The initiative is being actively run by the United States of America as a weapon against Covid. These doses are given away for free.

Now, the Administration is intent on terminating the programme. Last month, the money that was cautioned for potential fourth doses of Covid vaccines, is now unavailable. Hence, subsidized Covid testing, treatments, and vaccines may end soon.  On March 31, the federal government planned to make a special purchase of Evusheld to make it available to those with low immune systems who are at risk of contracting COVID-19. The treatment takes at least 6 months to make, so if the purchase isn’t completed, it means there won’t be enough later this year for individuals who are most vulnerable to infection, according to the White House.

Consider what would happen if similar programmes were to be cancelled. Yes, you got that right: the government will cut spending, resulting in a smaller budget deficit.

Surprisingly, the latest budget has increased the baseline of the Budget Deficit. Take a look at the figures in both the budget proposed this year and the budget recommended by Biden last May, and you’ll notice the differences –

This begs the question of whether the budget deficit has shrunk or not. Biden’s performance is $2.3 trillion worse than the preceding year.

The proposed budget forecasts 4.7 per cent inflation for the fiscal year ending September 30 and 2.3 per cent inflation for the fiscal year beginning October 1. Observing current events around the world, these figures appear to be made up. Questions were raised by reporters and answers were provided by Council of Economic Advisers Chair Cecilia Rouse on a background call with reporters. In this call, she said, “the budget’s economic forecasts were locked in as of 10th November 2021 due to printing and other deadlines. As a result, more recent events, such as increased federal spending and the impact of the Ukraine incursion on oil and food prices, were ignored when putting together the budgetary plan.”

President Joe Biden claims that the federal government’s budget deficit is shrinking. However, it is absurd for the administration to claim credit for this because it is done through unwelcome means.

If ending social policies, raising the baseline, increasing taxes, and citing inaccurate inflation rates had assisted countries in reducing their ‘actual’ deficits, many world nations would not be suffering from a debt-ridden economic crisis.

Best 24 I need you quotes to share with anyone