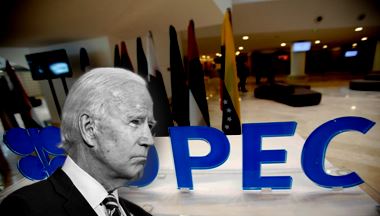 The West spearheaded the ‘go-green’ agenda that favored the use of green energy over fossil fuels. It was an obvious threat to The Organization of the Petroleum Exporting Countries or the OPEC. OPEC is an organization that controls petroleum production, supplies, and prices in the global market.

OPEC sees the Russia-Ukraine was as a blessing in disguise

Simply put, they rule over and dictate the global crude market, whose very existence is now challenged by the West’s push towards green energy. So, the Russia-Ukraine war has now come as a blessing in disguise for these oil-producing nations. OPEC nations, including Saudi Arabia and the United Arab Emirates, have now laid out plans to fleece the West of billions of dollars during this global oil crisis. OPEC nations on Monday told the EU that they will not pump more oil as requested by the bloc to stave off the oil crisis, as it is not possible for them to replace Russian oil supplies.

OPEC Secretary-General Mohammad Barkindo told the EU that “We could potentially see the loss of more than 7 million barrels per day (bpd) of Russian oil and other liquids exports, resulting from current and future sanctions or other voluntary actions.” The Secretary-General further said, “Considering the current demand outlook, it would be nearly impossible to replace a loss in volumes of this magnitude.”

Crude oil prices have run red hot after the West’s anti-Russia rally and its sanctions on Russian oil. Oil prices reached a 14-year peak last month after Washington and Brussels imposed sanctions on Moscow following Russia’s invasion of Ukraine. Now that’s a golden opportunity for the OPEC nations to mint more money out of the West’s miseries.

So, they are now openly refusing to pump more oil to not smoothen the oil supplies anytime soon. Not only this stance has strengthened Russia’s resistance against the Western sanctions, but this has also allowed OPEC heavyweights to earn more dollars by banking on throttled supply chains.

OPEC eying to teach the West a lesson of their life

Mind the fact that Russian oil has not been sanctioned by the EU so far. However, the bloc has agreed on sanctioning the Russian oil next. Now, the EU wants OPEC nations to replace Russian oil supplies to steer clear of an aggravated oil crisis. But OPEC nations are no simpleton! They won’t shoot themselves in the leg at a time when they know it is high time to teach the West a lesson of their lifetime.

OPEC nations’ message to the West is loud and clear—the current oil crisis being faced by them is making of their own. OPEC secretary Barkindo on Monday also said that the current highly volatile market was a result of “non-fundamental factors” outside OPEC’s control. That’s what you call a spectacular humiliation. OPEC is a grouping of authoritarian regimes that naturally prefers its ties with Russia over the US.

The West’s increased focus on green energy under liberal governments has presented these OPEC nations with an opportunity to dictate the global oil market again. Moreover, the Biden administration’s frayed ties with the Arab nations have further added the fuel to the fire. Last month, it was also reported that leaders of Saudi Arabia and the UAE explicitly declined a phone call with Biden and talked to Putin instead.

Read More: MBS and MBZ give Joe Biden the biggest humiliation of his career

When Europe laughed off Trump’s suggestion

Interestingly, it was former US President Donald Trump who first acknowledged the gravity of the West’s over-reliance on OPEC nations for their energy supplies. In 2018, he had even scolded Germany for keeping its all eggs in Russia’s basket. Trump once said, “Europe’s most powerful economy spends on defense to target where they buy their energy from. Germany is totally controlled by Russia. They will be getting between 60 and 70 percent of their energy from Russia through a new pipeline.” Yes, he hit the bull’s eye in his speech. And this was how Germany had then reacted to Trump’s, what they laughed off as a senile suggestion.

Well, today the West, and especially the EU, is paying a huge price for their utter ignorance of Trump’s suggestion. OPEC nations are finally winning this global oil war and only the Western governments are to be blamed for this catastrophe!