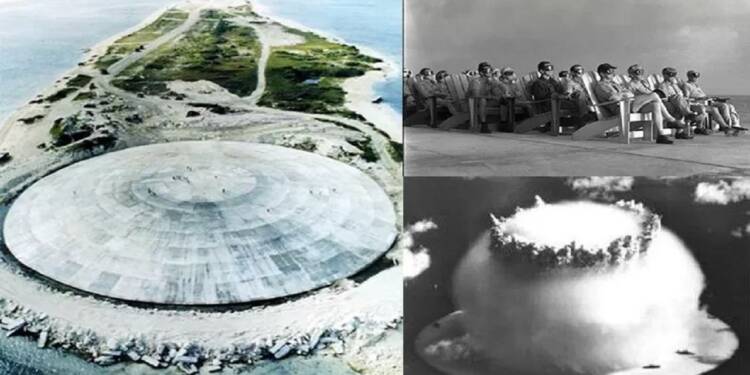 A gigantic, old and weathered concrete dome bobs up and down with the tide 5,000 miles west of Los Angeles and 500 miles north of the equator, on a far-flung island of white coral sand in the central Pacific, The Marshall Island.

As a result of its Cold War atomic testing program, the US plagued a small island country with a large amount of radioactive waste. The Marshall Islands, more than any other nation, became a victim of the two biggest existential threats in the twentieth century: nuclear weapons and climate change.

There are not enough inhabitants residing in the country, but there are still tonnes of radioactive soil and nuclear waste all over it, making it another nuclear calamity like Chornobyl in 1986.

The US risked the life of Marshallese

There are 29 atolls in the Republic of the Marshall Islands (RMI), which lie almost midway between Hawaii and Australia in the Pacific Ocean. Between 1946 and 1958, The United States tested 67 nuclear bombs, destroying entire islands, excavating craters in shallow lagoons, and displacing hundreds of people.

The islands were under US protection at the time. The nuclear tests and their aftermath had the greatest impact on four northern atolls: Enewetak, Bikini, Rongelap, and Utrok, which were all evacuated owing to nuclear fallout from testing with radiation up to 1,000 times higher than the Hiroshima bomb.

Cancer, thyroid diseases, stillbirth (including “jellyfish infants” born without bones), and congenital birth defects all increased dramatically among Marshallese people. The Marshallese continue to suffer from these ailments at one of the highest rates in the world.

Following that, the world’s suspicions increased. The US went further and conducted a dozen biological weapons experiments and dumped 130 tonnes of dirt from a radioactive Nevada testing site. Moreover, the dome was then filled with the atoll’s most destructive trash and dirt. Concrete tombs, which are actually concrete coffins, were also used to cover detonation sites in the United States.

As a result, the tombs are in danger of crumbling due to rising sea levels and other climate change-related factors. As distant glaciers melt and ocean waters rise, tides are creeping up its sides, getting higher every year.

Only civilians from two of the 29 atolls have been resettled, and there is no timetable for Marshallese to return permanently to atolls of Bikini and Rongelap as radioactive pollution in these areas is still an issue according to data from the US Department of Energy.

With the goal of becoming a nuclear power and maintaining its dominance, the United States has entrusted a sixty-thousand-strong nation with a complex, expensive, and deadly job that no one believes the Marshallese government can complete on its own: resettling individuals in a rapidly deteriorating nuclear chamber.

Repairing the Dome’s leaks and cleaning up the waste that has already been spilled as a result of climate change will cost billions of dollars, making it an unfeasible undertaking for a country with the 203rd highest GDP on the planet. As sea levels rise, the damage to the Runit Dome will intensify, putting the surrounding areas at risk of catastrophic levels of radioactive waste.