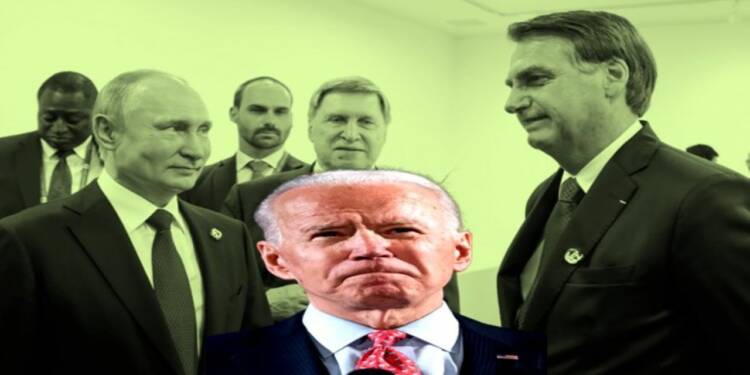 Whether the US or the West likes it or not, there is no dearth of countries putting their weight behind Russia in the ongoing Ukraine-Russia crisis. The latest country to join the fray is Brazil, which is headed by the right-wing nationalist government of President Jair Bolsonaro.

Jair Bolsonaro is a long time Russia dove and has maintained a neutral stance on the war from day one. In fact, he had reaffirmed his solidarity with Russian President Vladimir Putin just days before Russia ordered its troops into Ukraine. Now as per European media, Brazil has assured the Kremlin of its full backing at the international forums such as IMF, G20 and the World Bank.

For those unaware, the US has launched a global campaign to exclude Russia from all these international forums, but with little success. Radio Free Europe reported that US Treasury Secretary Janet Yellen is expected to call on her counterparts to ramp up the economic pain on Moscow at the upcoming IMF and World Bank meetings. Last week, the U.S. official had also said that the United States would not participate in any G20 meetings if Russia were present.

Russia is well aware of the USA’s ongoing charm offensive to lure nations into its anti-Russia rally. So, Russia last month sent a letter to Brazil asking for its support at IMF. In a letter dated 30th March, Russian Finance Minister Anton Siluanov had written to Brazilian Economy Minister Paulo Guedes asking for Brazil’s “support to prevent political accusations and discrimination attempts in international financial institutions and multilateral fora.”

Anton Siluanov further wrote that “Behind the scenes, work is underway in the IMF and World Bank to limit or even expel Russia from the decision-making process.” Now, it has been confirmed that Brazil has accepted the Russian request and it will strive to block the USA’s efforts at IMF of seeking Russia’s expulsion.

Erivaldo Gomes, the Brazilian Economy Ministry’s secretary of international economic affairs, recently said that Brazil would like to see Russia’s involvement at major multilateral international forums. The top Brazilian official said, “From Brazil’s point of view … keeping an open dialogue is essential,” he said. “Our bridges are the international bodies, and our assessment is that these bridges have to be preserved.”

Prior to this announcement, Brazil’s foreign minister Carlos Franca had also said that his nation would oppose USA’s campaign to kick Russia out of the G20 grouping. Franca had told a Senate hearing on 25th March that “The most important thing is to have all international forums, the G20, WTO, FAO, functioning fully, and for that, all countries need to be present, including Russia.”

That’s another international embarrassment for the US on the world stage. Biden’s anti-Russia war is faltering, and even USA’s close allies like Japan, UK and Germany are increasingly feeling uncomfortable in backing Biden’s tough stance due to its adverse impact on their economies. Nations joining Biden’s anti-Russia rally are mired in economic crises and the cost of living in these nations has drastically gone up. Brazil too is set to face unprecedented food inflation since its fertilizers import from Russia have seriously been hampered. So, it’s increasingly becoming a tedious task for Biden to sustain his sanctions war against Russia in the wake of rising global inflation and an imminent food and energy crisis.