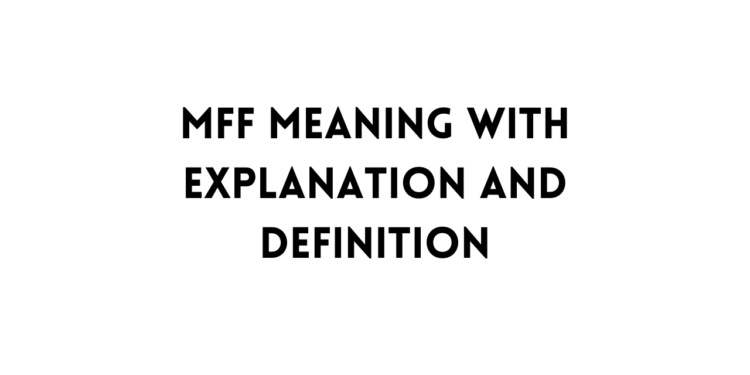 We are going to talk about What does MFF stand for and what is the meaning of MFF? There are various categories where MFF terms are used on a daily basis so we have included major abbreviations of MFF so you can find your specific field’s explanation here.

What is the Meaning of MFF?

In Accounts and Finance, the meaning of MFF is Multitranche Financing Facility.

Explanation – The multitranche financing facility (MFF) establishes a partnership between the Asian Development Bank (ADB) and a client for the purpose of working in a specific sector or sectors. It comes with a backup letter of credit that can be used to extend debt financing or advice.

In Medical, the meaning of MFF is Mitochondrial fission factor.

Explanation – Mitochondrial fission factor is a protein encoded by the MFF gene in humans. Its main function is to regulate mitochondrial division. It has also been shown to control the morphology of peroxisomes.

In Environmental organisation, the meaning of MFF is Mangroves for the Future.

Explanation – Mangroves for the Future (MFF) is a one-of-a-kind partnership-led initiative that encourages investment in coastal ecosystem conservation for long-term development.

In Military and Defence, the meaning of MFF is Military Free Fall.

Explanation – Military Free-Fall parachute operations during the course include high altitude low opening and high altitude high opening parachute jumps with and without weapons, combat equipment (including NVGs and body armour), and supplemental oxygen system in day and night conditions from altitudes of 10,000 to 25,000 feet.

In Sports, the meaning of MFF is Metroplex Flag Football.

In Airport Code, the meaning of MFF is Moanda.

Explanation – Moanda, located on the N3 road in Haut Ogooué, is one of Gabon’s largest cities. Under the auspices of the Compagnie Minière de l’Ogooué, which began mining in 1957, it is also one of the world’s most important manganese mining towns.

In Accounts and Finance, the meaning of MFF is Multiannual financial framework.

Explanation – The European Union’s Multiannual Financial Framework (MFF), also known as the financial perspective, is a seven-year framework that governs the EU’s annual budget. It is enshrined in a Council Regulation that was unanimously adopted with the European Parliament’s approval.