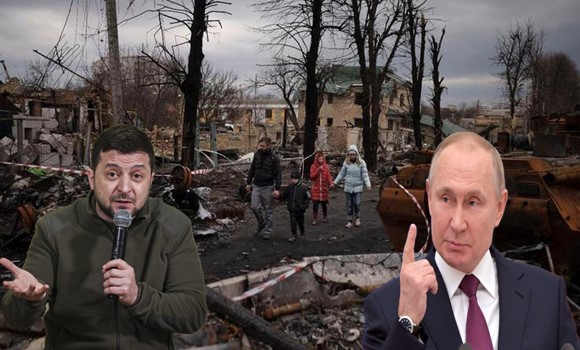 When Russia targeted Kyiv with its deadly cruise missiles that razed a rail car repair facility on Sunday, not many people knew this had anything to do with military tanks donated to Ukraine by the West.

The ruthless strafe that ended the eerie calm of the Ukrainian capital saw no casualty, suggesting that the intention of the strike was not to disseminate panic among the civilians but to destroy something safely parked in the repair facility. Now, it turns out that what got destroyed in the brutal barrage were European tanks that were supposed to brave Russian military might on the battlefield.

Soon after the strikes, Russia claimed it had destroyed T-72 tanks that had been provided to Ukraine by European countries and were being stored in the buildings of a car repair business. However, Ukraine was quick to refute such claims.

Oleksandr Kamyshin, the chair of the board of Ukrainian Railways, said the Russian claims were false. He said, “There are no such tanks at the plant, as well as no military equipment. There are only cars that we repair. These carriages we need for export – these are, in particular, grain carriages.”

That’s not the first time that Russia is claiming to have destroyed west-donated armaments in Ukraine. Last month, on 21st May, the Russian defence ministry had destroyed a major consignment of Western arms in Ukraine’s Zhytomyr region, west of Kyiv, using sea-launched Kalibr cruise missiles, as per an NDTV report.

What triggered the Russian assault on Kyiv?

This may be noted that the recent airstrikes on Kyiv came after Ukraine’s decision to acquire long-range missiles from the US. Kyiv has been urging the US and other Western allies to ship US-designed MLRS and HIMARS multiple-launch rocket systems.

Initially, the bellicose US administration was dragging its feet on the proposal, but later Joe Biden showed it the green light. Moscow saw this as an act of escalation, thus prompting it to bombard Kyiv from the launch pads in the Caspian Sea.

No point in sending weapons to Ukraine

You see, the armaments being channelled into Ukraine by Europe and the US are just adding fuel to the fire without substantially helping Ukraine bolster its defences. Instead, as a result, Russia is making it a point to launch more strikes on Ukraine and flatten civilian as well as military infrastructure.

The West must realize that Ukraine’s situation in the ongoing war is miserable! Its troops are deserting and commanders surrendering! Russia effectively controls the country’s ports and industries. Russia virtually controls Ukraine’s food exports to Europe and beyond. And last but not the least, Russia is a major military power that boasts the world’s second-strongest firepower. Simply put, Ukraine has no chance against Russia. So, weapons being donated by the West hardly make any changes on the ground, it just provides Russia with another opportunity to put its arms into use against Ukraine.

Not just Turkey, the stormy clouds over Sweden’s NATO bid have a new opponent