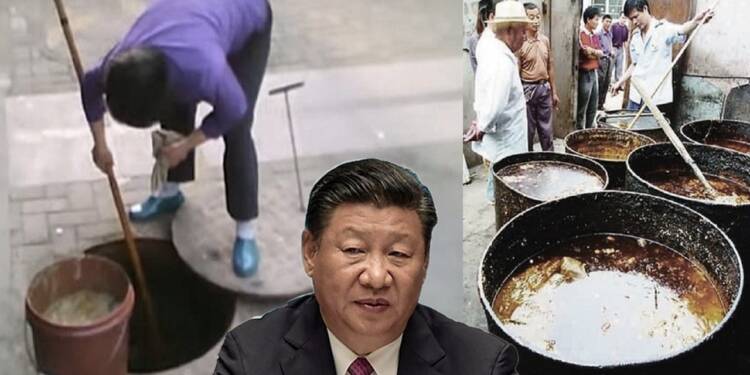 Covid isn’t the only reason why you should cancel your upcoming visit to China, its stomach-churning and repulsive food habit has to be the other! Chinese food can make you sick, extremely sick; because 10% of the cooking oil being used by Chinese vendors is gutter oil.

So, what exactly is Gutter oil? This is a kind of black-market oil that is recycled from the garbage. Men on duty would go through trash bins, gutters, sewers and even the solid waste of slaughterhouses to scoop out the liquid and remaining animal parts. Then this is processed into poisonous cooking oil, which is sold to cheap Chinese vendors at a lower price than that of the original cooking oil.

The oil produced this way is far from edible and contains all sorts of untold carcinogens, a cancer-causing agent. In 2013, it was reported by Washington Post that this gutter oil production mafia spans at least 13 cities of China. The annual market for Gutter oil in China is worth millions, encouraging more and more entrepreneurs to indulge in the illicit practice on a large scale.

Problem aggravated after the Ukraine war

On paper, China has cracked down on the Gutter oil extraction business long back; however, Reuters reported in 2017 that the illicit production was still in practice. And the situation is expected to have gotten aggravated in the backdrop of the Russia-Ukraine crisis.

In April, it was reported that China was facing a severe shortage of edible cooking oil. As far as vegetable cooking oil is concerned, China’s exposure to Ukraine stood at 59% before the war. Earlier, major cooking oil producer nations such as Indonesia and Malaysia had also introduced export restriction measures, thus further throttling China’s cooking oil supplies.

So, it’s feared that the Gutter oil mafia in China could expand its presence in the country banking on the skyrocketing prices and soaring demand. With more than 1.4 billion people producing thousands of tons of waste oil every day, a dirty black market is bound to expand around this slippery commodity.

Why the “Gutter Oil” business is lucrative for restaurants?

For Chinese restaurants and food makers, dealing in the dirty gutter oil market is super lucrative! The director of the Wuhan Airui Biodiesel Company was quoted by China’s Xinhua News Agency as saying, “Restaurants have to pay a certain fee if they hire the city’s sanitation workers, whereas selling kitchen waste to private parties can make up to 10,000 yuan ($1,500) every year,”. According to a report, “a large restaurant is capable of making 2 million yuan ($294,117) per year just by selling its kitchen waste.”

Grist, a non-profit news outlet, reported that “Not only are restaurants incentivized to sell their used oil to private contractors, but they’re also incentivized to buy the processed oil back. The price of swill-oil is “half that of ordinary cooking oil.” So, you can understand why this gutter oil business is so hot in China.

This egregious food safety scandal in China is as disgusting as expected it is. Food shortage is a burgeoning crisis in China, and a pinching shortage of cooking oil can very well send anti-CCP sentiments soaring amongst the ordinary Chinese. That’s why it’s highly likely that this illicit gutter oil production business has tacit approval from the Chinese Communist Party. So, poor Chinese are now caught between a rock and a hard place, where those without food are bound to die of hunger, and those with food are bound to die of the poisonous oil that they would be chowing down on desperately.