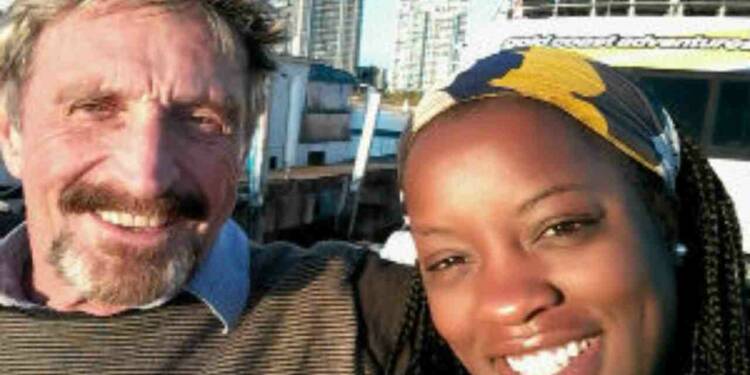 Her relationship with her husband

According to reports, Janice McAfee told a TV program that John freed her from a life of human trafficking and allowed her to reconnect with her son. Janice McAfee wrote in a Tweet she sent out in 2020. She said “@officialmcafee & I met 8yrs ago today. It feels like we’ve lived a dozen lifetimes since then. I don’t recognize the girl I was when first we met but I love the woman I’m becoming. John’s imprisonment is the longest we’ve been apart but I’ll continue to fight for his freedom.❤”

Janice Dyson is best known for her marriage to John McAfee, the late founder of the McAfee Association and the designer of antivirus software. In the early 2010s, she married the British computer programmer and remained his wife until his death in 2021.

John McAfee and his wife Janice McAfee have been married since 2013, according to a Heavy.com article. Janice and John first met in 2012, when he hired her as a prostitute and paid her. During the first several years of their marriage, Janice stated in an interview that she had to transmit information about McAfee to a ‘criminal underworld.’

Janice claimed in the interview that she was obliged to provide information about John’s location and that her criminal contacts urged her to place poison in his food. Janice further said that she was first afraid to disobey the thieves and did not inform McAfee of the situation.

John McAfee eventually discovered what was going on, and the pair moved to a luxury yacht to evade arrest and criminal elements, according to McAfee.

Beyond the foregoing, however, there are little data regarding McAfee’s African-American wife, particularly when it comes to her life before meeting the antivirus designer.

It is thought, however, that she came from a poor household and that she experienced domestic violence and poverty at some point in her adult life.

Janice was a prostitute in South Beach, Florida, when she first encountered McAfee in 2012. She had been employed for sex by the software engineer. According to Newsweek, he was fleeing Belize after becoming a top suspect in his neighbor’s murder.

How and why did she date McAfee?

Surprisingly, it was discovered shortly after they began dating that Janice Dyson had started dating McAfee in order to spy on him for cartel leaders for whom she worked. They had actually given her orders to drug and poison her.

So she’d give gangsters who intended to kidnap him the information about his whereabouts. She was working for Delmariea Kamani Crutchfield, alias “Suave,” a previous associate. The original aim had been to kidnap and rob him.

We hope this biography article of Janice Dyson will be helpful for you to understand her journey and works.