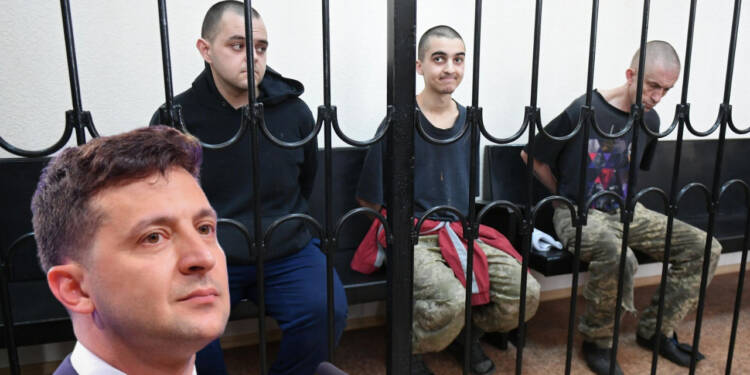 Foreign mercenaries who went to Ukraine to scare Russian soldiers off are today running helter-skelter for their lives. It looks like they might never lift the arms again. Media reports claim these fighters are baying for leaving Ukraine like there is no tomorrow! Russia claims Ukraine had hired around 7,000 foreign combatants, from 63 nations, to fight the war. Now, only 3,500 fighters are present on the battlefield. Kyiv doesn’t want to see them go away, so it’s said to have trapped them in Ukraine so that they can never escape brutal death at the hands of invading Russians.

Simply put, the fighters who once sweated blood for Ukraine, are now cursing it for leaving them in the lurch. Many of them have been held hostage by Russia, whose future now hangs in balance. To put things into perspective, so-called the Donetsk People’s Republic (DPR) recently sentenced three foreign mercenaries to death on the charges of attempting to “forcibly seize power in the DPR for a reward”. Ukraine was nowhere to voice their rights. Although, United Kingdom tried to caution Russia against the verdict, that expectedly went in vain.

British Foreign Secretary Luz Truss condemned the sentencing as a “sham judgement with absolutely no legitimacy.” Prime Minister Boris Johnson’s spokesman Jamie Davies said that under the Geneva Conventions, POWs are entitled to immunity as combatants. But Russia is denying to confer the POW status upon them! Russia says they weren’t fighting for their nation but got hired to train their guns on the enemy, in this case, Russia.

‘No POW status for foreign combatants’

Russian Defense Ministry spokesman Igor Konashenkov in March made it clear that none of the foreign combatants should ever fancy the POW status. He said, “I wish to make an official statement that none of the mercenaries the West is sending to Ukraine to fight for the nationalist regime in Kyiv can be considered as combatants in accordance with international humanitarian law or enjoy the status of prisoners of war.” “At best, they can expect to be prosecuted as criminals. We are urging all foreign citizens who may have plans to go and fight for Kyiv’s nationalist regime to think a dozen times before getting on the way,” Konashenkov added.

But, despite this warning, foreign mercenaries kept fighting! After all, the contract had plentiful lucrative perks and remunerations! Today, however, when they are pleading for their lives, Ukraine has left them to fend for themselves. Now, combatants captured by Russia hope to return to Ukraine only after they are dead. But even that might also turn out to be a “too much asking” Kyiv and Moscow have already reached a deal to swap corpses of soldiers who died fighting the battle.

Mercenaries left in the lurch

However, Ukraine’s policy remains ambiguous on whether dead foreign mercenaries would also be exchanged for dead Russian bodies. Since the casualties suffered by Russia are way lower than that of Ukraine, this dead body exchange scheme may soon get exhausted for Ukraine. So, it’s highly likely that Ukraine will prefer to get the dead bodies of its own soldiers first.

All in all, these foreign mercenaries are now finding themselves caught between a rock and a hard place. On one side, they face the invading Russians; on the other, they face the backstabber regime of Kyiv; on both sides, they face death. Kyiv is shamelessly prosecuting the deserting fighters and soldiers. So, they are not expecting any relief from Kyiv either! It turns out that they never expected the battle to be this tough and life-threatening. Those who got swayed by hefty pro-Ukraine propaganda on social and mainstream media now must be regretting the worst decision of their life—to lift arms against mighty Russia and fight for a thankless nation like Ukraine!