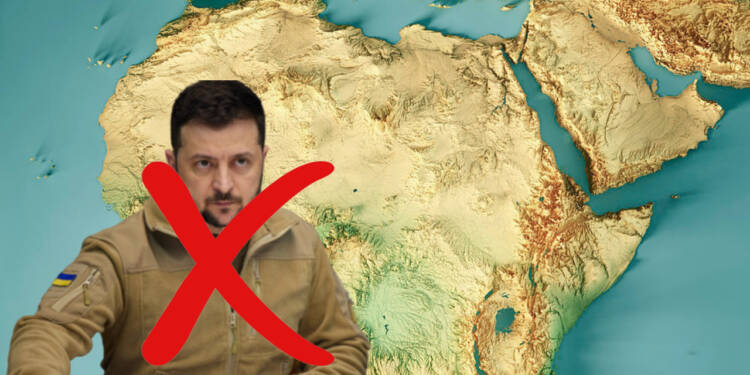 What would be your reaction if you learned that a president of a nation had requested a meeting with the leaders of a continent, and the latter flatly refused to meet? Isn’t that offensive?

The Ukrainian president Zelensky experienced a similar occurrence.  Mr. Zelensky got shunned by the African presidents.

No time for Zelensky

In order to garner the support of the African nations, Zelensky called for a virtual meeting in secret and behind closed doors. While Olaf Scholz and Emmanuel Macron pushed Macky Sall, the current African Union (AU) chair, to convene as many heads of state from the continent as he could for a meeting with the Ukrainian leader. You would laugh aloud once you learn what occurred next!

Almost all African leaders declined to participate. Yes, you got that right.

The president of Ukraine met with African Union officials on June 20 to discuss issues pertaining to the ongoing war in Eastern Europe and Africa’s place in the global arena. Only four of the fifty-five heads of state who were invited to the meeting actually showed up. Even though the meeting was virtual, the other nations merely sent ambassadors or ministries, refusing to send their heads of state or government.

But what do you think is the possible reason for this ignorance and low popularity of Zelensky among these nations? Well, nearly the whole continent of Africa is plagued by famine and starvation. While millions of animals that households depend on for milk and meat have perished, prices for basic commodities like wheat and cooking oil have more than doubled.

These countries were already mired in poverty and the ensuing hunger. Moreover, the COVID pandemic worsened the famine issue. The conflict between Russia and Ukraine is exacerbating the hunger situation further.

Russia is a more reliable partner

Nevertheless, Russia and Ukraine together are called the ‘breadbasket of the world’. They constitute the majority of grains and fertilizer supply to the rest of the world. Before the war, African countries imported 44% of their wheat from Ukraine and Russia. And since the conflict commenced these nations have faced an acute shortage of these food grains and also the fertilizers.

Though Zelensky claims that the food crisis is caused exclusively by Russia but he is no longer able to convince these African nations. For one, it is clear that the sanctions against Russia have more directly contributed to the problem than the actual conflict itself, which encourages emerging nations to favour their removal.

And two, there are several rumours that Kyiv is trading food for weaponry with the US and Europe, which is completely unacceptable to these nations.

For this reason, these African nations shunned Zelensky when he wanted to meet the heads of these nations. This demonstrates two points: first, there is no surge in Zelensky’s support among these countries; and second, Russia is a better and more reliable option for these countries.

Although the rest of the world may say that Russia is completely to blame for the severe food scarcity in Africa, these African countries are aware of Russia’s importance to their continent’s food security. It is totally expected that the African Union will cut connections with Kyiv in this situation and instead seek to engage with Russia which provides the most promising prospects for collaboration.

Germany jumped off a cliff, and now it’s saying that Canada pushed it

Biden is pitting Kurds against Kurds