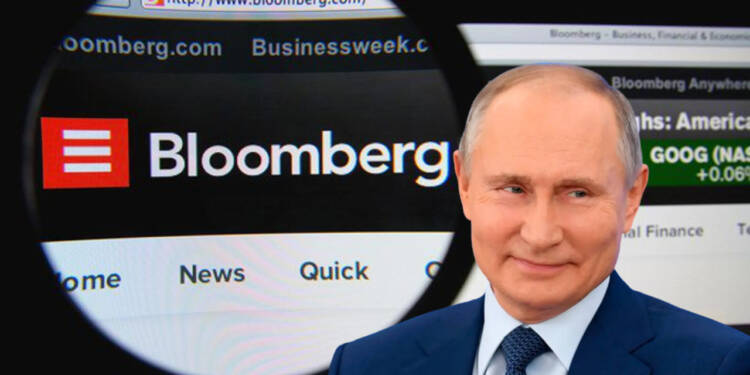 The sanctions imposed by the West have failed to tame the Russian bull wreaking havoc on Zelensky’s regime in Ukraine. So, a dispirited and disenchanted Biden administration is now resorting to wage propaganda warfare on Russia. And guess who is helping the USA’s senile administration amplify its baseless anti-Russia propaganda—It’s Bloomberg, yet again.

So, Bloomberg, on June 26th, in a report titled “Russia Defaults on Foreign Debt for First Time Since 1918” went on to declare that Western sanctions on Russia have finally culminated, resulting in total devastation of the Russian economy. The report read, “Russia defaulted on its foreign-currency sovereign debt for the first time in a century.”

The report added, “At the end of the day on Sunday, the grace period on about $100 million of snared interest payments due May 27 expired, a deadline considered an event of default if missed.” The impression that Bloomberg wanted its viewers to get was that the Russian economy is really in bad shape and that Biden’s sanctions on Russia have finally succeeded.

Russia’s economy outshines that of Europe

Alas! Nothing of that sort happened actually! First of all, it is inaccurate to say that Russia doesn’t have the means to meet its payment obligations. In fact, the US officials early this month have themselves acknowledged that Russia’s energy revenues had surpassed the pre-invasion levels. Evading sanctions, Russia has been able to sell more cargoes to other buyers, including major energy consumers China and India, by offering it at a discount to oil from other origins. So, the claims that the Russian economy is starving for cash and lacks the means to pay investors the due returns don’t hold ground.

The truth behind ‘Russia defaulted’ claims

The truth is that it’s the western sanctions that are blocking Russia’s already-fulfilled interest obligations to reach the investors. Yes, Russia has already paid its due obligations, but still, the payment did not reach the investors. The Russian foreign ministry in a statement said, “Russia sent the payments on its international bonds on May 20, but that the money did not reach its final recipients as international clearance systems did not authorize the payment.”

It may be noted that Euroclear, a European company acting as a middleman between Russia and the investors, has withheld the money due to sanctions. Kremlin spokesperson Dmitry Peskov also clarified on Monday, “The fact that Euroclear withheld this money and did not bring it to the recipients is not our problem. There are absolutely no grounds to call such situation a default.”

Read More: Germany will be the first big European country to opt-out of EU sanctions on Russia

Now, Russia has asked the investors to press Euroclear to release their due payments. You see, the Western sanctions on Russia are coming to bite the West again, in place of hurting the interests of the Russian economy. It’s the investors whose rights are being infringed upon.

But the Bloomberg story didn’t give any space to the concerns of such investors; nor did it clarify that Russia was actually forced into this situation of “default”. It appears like Bloomberg is increasingly acting like an extension of Joe Biden’s propaganda warfare in the geopolitical arena. In April, the same media outlet had falsely reported that Germany was considering snubbing India ahead of the G7 summit that concluded yesterday in the Bavarian Alps.

Bloomberg claimed that Given India’s reluctance to condemn Russia for invading Ukraine, Germany could drop India out of the invitees’ list. However, the Indian government was quick to debunk such unfounded claims. An official of India’s Ministry of External Affairs had said that “The summit is more than two months away, and we can’t seem to figure out what triggered this debate.” It was a tacit reference to the false claims being peddled by the propaganda media outlets like Bloomberg.

Those who can’t brave enemies on the battlefield tend to opt for easy alternatives. Biden, after having banned Russian media outlets in his nation, is now deploying his own lackeys in the media to disseminate fake news and propaganda against Russia to embellish his disappointing report card.