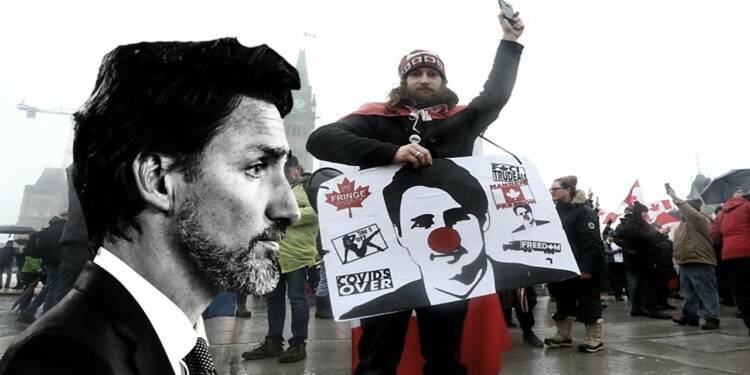 The chaos of the last winter that saw truckers steering their wheels blockading the streets is yet to fade out from the memory of the populace. An unprecedented move it was, that gave shudders to liberal champion Justin Trudeau.

Alarm bells went ringing in Ottawa as the leader who made it a staple to preach morality all day long decided to invoke back the draconian emergencies act to stifle the protest against the government.

Irony jingled a cruel tune as it was the same liberal doyen Trudeau who wilfully gave his full support to the onslaught carried out in the garb of farmers’ protests by extremist elements in India. It took a year time for Trudeau to taste the same medicine he once endorsed.

But, never can one compare the vile outings of anti-social elements in Delhi to the mild protest that happened in Canada. Also, this protest brought into light the farce that Trudeau played all these years in the form of liberalism. The perseverance and the attitude employed by the prime minister showed a striking resemblance to what we often witness in Cuba and Nicaragua, where an authoritarian calls the shots.

Espousing that trend, now Justin Trudeau has vouched to do more to end the extremism of conservatives in Canada. In a report tabled before the House of Commons rose for the summer, the Public Safety Committee recommended the federal government work with provinces to prevent what it described as a rising threat in Canada and to take steps to hold online companies more accountable for extremist or hateful content circulating on their platforms.

In the report’s 32 wide-ranging recommendations, the committee said Canada needs a national, multi-pronged strategy to address this type of violence.

The pandemic lockdowns and the unfailing appeasement directed only at immigrants have forced the natives of Canada to go revolt in words against the government. But the protesters were about to witness a shock since Trudeau was known big for the free speech attitude he possessed. But high morality and liberalism were only reserved for big talks. In reality, Trudeau barely walked the talk. Trudeau ordered strict rules to be imposed to curb the protest that never for once interrupted public life.

Now the government in Canada is looking to intrude into the digital space of citizens for content moderation and altering of algorithms. This is done according to the comments from the Public Safety Commission that warned Trudeau to get control over the digital space to put an end to any kind of protest.

“The Government of Canada [should] work with domestic and international partners to identify and remove online bots amplifying extremist content and encourage online platforms to provide contributor and content authentication mechanisms … that enable users to filter content on that basis,” the committee wrote.

The government is also getting set to stop crowdfunding that they view as the foundation of all protests that happen in Canada. Financial Transactions and Reports Analysis Centre of Canada (FINTRAC) has the power and resources it needs to monitor suspicious transactions on crowdfunding and cryptocurrency platforms.

Appallingly enough, this is from the same government that declared allocation of millions of dollars in funding to grassroots organizations, many led by Muslims, to combat hate. “We’re also launching a process to appoint Canada’s very first special representative on combating Islamophobia,” PM Trudeau added.

Canadians should ponder over the fact that Ottawa is funding the “fight Islamophobia” campaign that is not just pouring Canadian taxpayer’s money into the pockets of the very people who are the flagbearers of pan-Islamism but also those who desire Islamic Sharia in Canada.

As reminded before if any of the conservatives want a decent life in the paradise that Trudeau gloats about, better identify yourself as an immigrant. Adding Islam into it will only do you favour. If you are not willing to abide by this, better brace yourself to get choked out by hordes of law enforcers in the erstwhile paradise of Canada.

Collection of Inspiring 31 I am enough quotes and captions