Seems like Russia’s patience has run out. President Putin has now decided to settle the score. 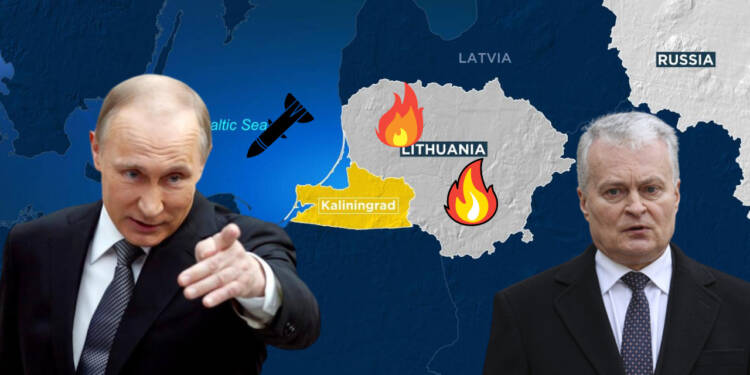 After Russia invaded Ukraine, European Union thought the only way to put a break to Russia’s expansionism was to injure it economically and financially. It has so far imposed a slew of sanction packages on Russia, needless to say, without achieving the desired result. In the words of France’s National Rally party leader, Marine Le Pen “sanctions have enriched Russia; they have sanctioned the French more than they have sanctioned Russia.”

And not just France, the world is facing the music as a consequence of the reckless anti-Russia campaign.

The Russian exclave of Kaliningrad, hundreds of miles away from the rest of the country and the westernmost federal subject of Moscow was brought under sanctions by the EU three weeks ago. After being pressed by the EU, the small Baltic state of Lithuania had to ban the transit of Russian goods through their territory to the Kaliningrad Oblast.

Remember, this was not just a transit ban for Kaliningrad, which would have hurt Russia economically or financially, it was designed to choke Russia strategically. That because Kaliningrad is no less than an unsinkable military base for Russia in the Baltic Sea. Thousands of Russian troops, the Baltic Fleet of the Russian Navy, two air force facilities, state-of-the-art air defences, and deadly Iskander-M missiles; are all stationed here.

But these words of caution fell on deaf ears as EU rejected Germany’s plea. Lithuania, after being directed by EU, on Monday announced that it would expand the transit ban to concrete, wood, alcohol and alcohol-based industrial chemicals.

After testing Russia’s patience for so long, the EU-controlled Baltic states may soon find themselves in hot soup. In a tit-for-tat move, Kaliningrad’s governor has now proposed a total ban on the movement of goods between the three Baltic states and Russia. Governor Anton Alikhanov said, “As a reciprocal measure we propose to completely prohibit the movement of goods (including those in transit from third countries) between the three Baltic States and Russia.”

The Kaliningrad exclave would be excepted from the ban. This move will effectively cut off the region from international trade as the Baltic Sea is controlled by Russia. Apart from gas, the Baltic region is totally dependent on Russian grid for electricity which Moscow can turn off anytime.

Recently, Kremlin also issued a statement on how Belarus and Russia discussed “joint steps” against the illegal blockade on Kaliningrad. With Belarus already on Russia’s side, Russia may attack the Suwalki Gap, the “Achilles Heel” of NATO and cut the Baltics from direct NATO military support. This will render the three nations extremely vulnerable to any Russian attack.

Thanks to EU’s and NATO’s ill-thought policy of provoking Russia, the Baltic region has now been turned into a powder keg. The war in Ukraine can very well reach the doorstep of Latvia, Lithuania and Estonia if the EU’s ‘Provoke-Russia’ policy is not rolled back.