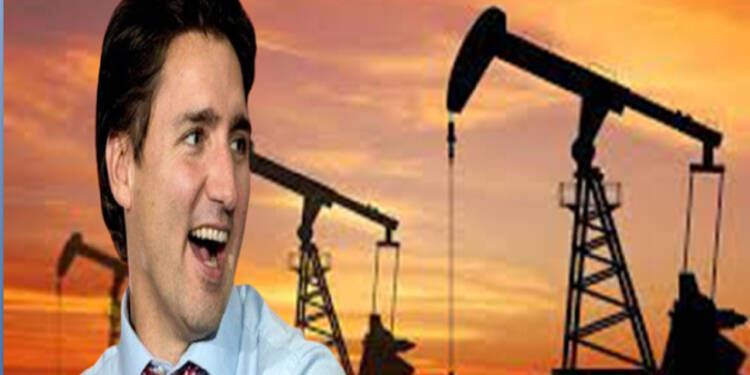 With the brashness of an authoritarian, Justin Trudeau is bringing up policies that will end up rich oil dominance of two provinces that have always defeated Trudeau’s liberal party. Trudeau has been routinely defeated in these two provinces and as a payback, the prime minister of Canada is now making moves that are ludicrous enough to make the whole of Canada go to penury. A region that houses vast reserves of Heavy, bituminous crude oil where everyone is related to someone who works in an oilfield. That is Alberta for you.

The western Canadian province engulfed in mountains has oil sands that are celebrated for being the fourth-largest oil reserves in the world, after Venezuela, Saudi Arabia, and Iran. Alberta’s oil sands’ proven reserves equal about 165.4 billion barrels (bbl).

Canadian prime minister Justin Trudeau has been eying this region for a long, but the people of this region favoured a politics that never crossed paths with Trudeau’s liberal party. The united conservative party, a far-right group political outfit garnered a massive victory over Alberta, dashing all hopes of the Liberal party. The story didn’t stop there. Trudeau came back to haunt Alberta for Covid policies, climate change, and freedom protests.

“We do not need a Conservative government that won’t be able to show the leadership on vaccinations and on science that we need to end this.” This was Trudeau’s statement while on a campaign run in Alberta in 2021 November.

The topmost leader of Alberta’s United Conservatives Party Danielle Smith even proposed new legislation, namely the Alberta Sovereignty Act, to ignore federal laws, court rulings, and regulatory decisions that the provincial legislature doesn’t like. It was done after Alberta ran out of patience with the repeated torture from the Trudeau-led government. Alberta produces 79.2% of Canada’s oil while Saskatchewan produces 13.5%. this highlights why Trudeau is salivating over these two provinces in particular.

You see, the liberal party has tried every trick in its book to gain control over this province but to no avail. So, Trudeau is currently moving with a heinous plan that could end the dominance of Alberta as the treasure trove for oil in the north.

Canada on Monday launched consultations on a plan to cap and cut greenhouse gases from the oil and gas sector, its largest and fastest-growing source of emissions, outlining two options to help achieve Prime Minister Justin Trudeau’s climate promises. Anyone with a sane mind could simply judge that it is politics all over the move. Unsurprisingly, the Alberta government was quick to offer its condemnation of Trudeau’s move.

“Alberta will not accept any plan from the federal government that seeks to interfere in our constitutionally protected ability to develop our resources”, the provincial government said in a joint statement from its Energy and Environment ministers.

Canada’s Minister of the Environment and Climate Change Steven Guilbeault said the country is aiming to cut emissions 40% to 45% below 2005 levels by 2030, and targeting net-zero emissions by 2050. To achieve this, policymakers need to enforce a sharp reduction in pollution from the oil and gas sector, responsible for 27% of the country’s emissions.

The minister also stressed the fact that it was pertinent for Canada to make this move to remain competitive as the world moves towards a lower carbon future. Trudeau this time has played his cards with the slyness that can put a fox to shame.

It is because on the surface, the deal is prudent and there is nothing to oppose since the topic of lower carbon emission is being widely discussed on the global stage. Chances are Trudeau may even win accolades from big organisations for such a pragmatic move.

But behind the garb of carbon emission lies a political ploy that only Alberta can understand. Saskatchewan, another province in Canada that borders the United States also experiences the same level of torture as Alberta for two reasons. For their untapped reserves of oil and for being a province ruled by a centre-right political party.

Trudeau’s policies might not just affect the two provinces but it will be a catastrophe for the whole of Canada. At a time when the world is craving oil, the two province stands a big chance to profiteer from the demands.

Big European oil companies, insurers, and some Wall Street investors have zeroed on Alberta for oil needs, which could have helped Canada prosper in these tiring times of inflation. But Trudeau is showing his skills of destruction with madcap policies that never will win him Alberta but will script an end to his political career altogether.