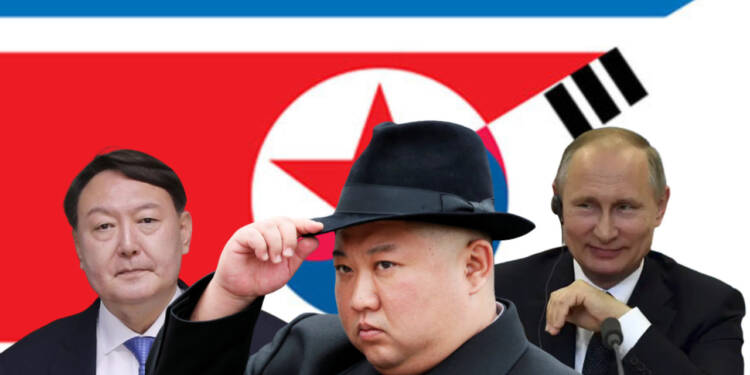 North Korea followed the footsteps of Syria, a staunch ally of Moscow, and recognized the “independence and sovereignty” of the two separatist republics in eastern Ukraine at end of June.

Prior to launching an all-out invasion of Ukraine, Moscow declared the separatist oblasts of Donetsk and Lugansk independent in February.

After five months of the rigorous war, Russia has almost annexed the Donbas regions. And this has made the life of North Koreans easy.

Now, without worrying about possible opposition from the Ukrainian government, North Korea can intensify its efforts to evade sanctions in eastern Europe.

North Korea has a shared history of forced labour and migration as their people used to travel to China and Russia in search of work. The partnership with Russia goes back to the Cold War when exiled Soviet-Koreans assisted in building political and social infrastructure in North Korea as well as countless industrial projects in both Pyongyang and Moscow.

After North Korea fired a long-range missile in December 2017, the U.N. Security Council sanctioned Pyongyang asking all member states to repatriate all North Korean workers living in their respective countries in two years.

The move was aimed to deprive North Korea of a rare legitimate source of foreign currency, worth hundreds of millions of dollars a year.

According to an earlier estimate by the U.S. State Department, about 100,000 North Koreans were thought to be employed abroad in 2017. Some experts say, North Korea used to earn between $200 million and $500 million a year from these workers.

However, by recognizing the independence of the breakaway regions, North Korea can expand its sanctions evasion campaign in eastern Europe with help of Russia and can send its workers there.

Despite the fact that North Korea is in breach of US and UN sanctions, Russia is willing to assist it economically by reducing its reliance on China.

Russia’s ambassador to North Korea recently said that “[North] Korean builders will be an asset in the serious task of restoring social, infrastructural and industrial facilities [in the Donbas] destroyed by the retreating Ukronazis.”

North Korea’s ties with South Korea have also begun to normalise after the Conservative Party was elected in the latter country. We can see the narratives change as North Koreans who have been reluctant to publicize information about South Korea’s democratic elections were quick to recognize the conservative president Yoon Suk-yeol.

Furthermore, North Korea has been constantly distancing itself from China, its largest trading partner, ever since China halted its railroad freight traffic to North Korea because of the Covid-19 spread.

China, which presently accounts for more than 90% of North Korea’s overall trade volume and the majority of its food and energy imports, is set to lose its position as its largest trading partner.

The over-dependence on China continues to be the greatest concern for North Korea. China’s brazen disregard for North Korea’s economic health has led Pyongyang to forge considerably closer ties with Russia. Economic independence and diversification in trade relations for Pyongyang will benefit it immensely in long run. Thus, South Korea and Russia are ready to help North Korea break out of China’s economic trap.