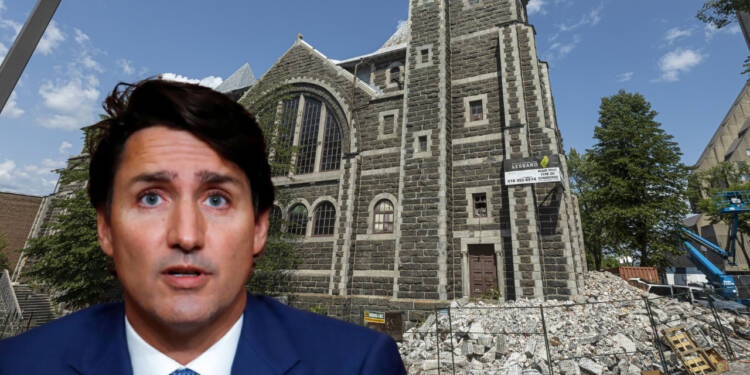 Quebec is a French-speaking eastern province of Canada. But the region went on to make some big headlines after the rare visit taken by ‘Pope Francis of Vatican’. The head of the catholic church was in for a blatant shock in Justin Trudeau’s own Quebec after recognizing that the province no more entertains religion but explicitly rejects it.

Quebec ranks different from all other provinces of Canada. Not for any exponential growth or development, but for being the most left-wing compared to the rest of Canada. Over 30 years the political landscape of Quebec tilted to the left and now the province is shaped in such a manner that religion and liberalism won’t coexist together.

“A lot churches are closing, and it’s very telling about the fading support that the population gives to the church,” said Jean-François Roussel, a theology professor at the Université de Montréal. “Some people are talking about the collapse of the Catholic Church in Quebec.”

Quebec houses 6.8 million French speakers. Once, the church used to influence politics in the region and now that culture has faded almost totally. This was known as the Quiet Revolution. That’s significant considering the Church founded Quebec’s school system and for decades-controlled education, teacher training, welfare, and health care.

Pope Francis’s trip to Canada had a generous tone. It was mainly intended to pacify the indigenous people who went to suffer inexplicable atrocities from church authorities in erstwhile times. After a moving “sorry” for the indigenous people, the itinerary for the head of the Vatican had on the list the old catholic stronghold of Quebec. But surely, the present condition of Quebec would have been the last thing Pope wanted to see.

In 2003 there were 2,746 Catholic churches in Quebec. Since then, 713 have been closed, demolished or converted, according to the Quebec Religious Heritage Council. Cardinal Gerald Lacroix of Quebec said last year that the number of churches in the province is not sustainable.

“The number of new priests does not exceed 10 per year. This leads to a profound restructuring of parishes and dioceses,” said E.-Martin Meunier, a sociologist of religion at the University of Ottawa.

But today, Quebec under the liberal government has all the ingredients to match Trudeau’s woke agenda. The notion of liberalism has been imbued into people such that Quebec is staunchly secular with zero regards for catholic ethics that influenced the region for a long. New-borns baptized as Catholic dropped more than 30% in the last 20 years, compared with just 13% from 1969 to 2001. Catholic marriages in Quebec also have plummeted for decades.

In 2019, on a similar note, Quebec became the talk of yet another liberal doing after the government controversially prohibited civil servants in positions of authority such as teachers, police officers, and prosecutors from wearing symbols of religion while at work.

Further hammering the few remaining believers was Quebec’s own Prime minister Justin Trudeau. The prime minister blasted the church for being “silent,” “not stepping up” and failing to show “the leadership that quite frankly is supposed to be at the core of the faith.”

And when it comes to the domain of development and infrastructure, Quebec happens to be a disgrace. Quebec spends the least amount of money per capita on health care of all the Canadian provinces. Nor is the Quebec income tax system particularly progressive, because of the very high marginal rate that kicks in at very low-income levels.

Whatever be the loss that Quebec incurs, on the brighter side, the people in the region and the government can glow in happiness for one single reason. The province had achieved its socialist project to the fullest.

Conservative provinces of Canada should take a lesson from Quebec affairs, as their churches and belief will be next.