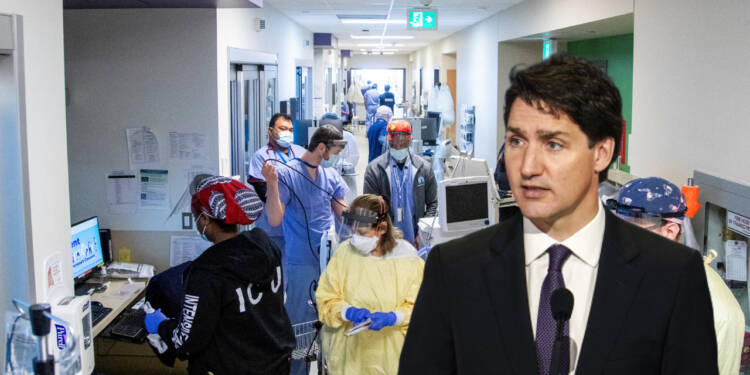 It is the start of August and something seems amiss. Normally, Justin Trudeau comes with a destructive plan, every month. But this time something seems to delay his policy. But alas, Canada is a vast land and there is no trouble finding a perfect spot for prime ministers’ liberal experiments.

Trudeau’s new find is the hospital sector. Not many will question it since the hospital sector was already a disaster before the pandemic. And now, the prime minister is off to a flying start with his new project of banning husbands from accompanying their pregnant wives in emergency situations.

It is a goddamn embarrassment seeing how Canada has transformed from a hub of prosperity to a dungeon for opposing voices. It is an uphill battle for people to survive in Trudeau’s Canada and the fear has now got into the hospital sector which was till now untouched by Trudeau’s liberal antics.

Justin Trudeau is forcing every citizen in Canada to Vaccination. On the surface, Trudeau’s action seems like a humanitarian deed to fight off Wuhan Virus. But nobody in Canada is ready to fall into that pit, since, the prime minister’s dalliance with big pharma companies has been a point of discussion in the past.

And, here is the thing. Even while being in a disastrous political climate, many in Canada are bravely fighting Trudeau’s vaccination policy. Thousands are not getting vaccinated and are still remaining at their healthy best. But for Trudeau, everything is business, even the health of Canadians. The opposing voice against vaccination dashes prime ministers’ hope of minting some money with big pharma companies.

You go against the king; you face the wrath. Likewise, in Trudeau-land, the unvaccinated are facing the wrath of the king. Thirty-nine employees at Royal Victoria Regional Health Centre (RVH) have lost their jobs for not complying with Wuhan virus vaccination and testing policies.

Another three professional staff are also no longer connected to the RVH Barrie hospital.

“All current employees and credential staff are in compliance with our mandatory vaccination policy,” RVH president and CEO Janice Skot told a local magazine.

The Royal Victoria Regional Health Centre is the only hospital in Barrie and is the regional hospital for a large geographical region including central Simcoe County.

The same RVH got in the news some time back for the acute shortage of staff including surgeons needed for an emergency.

But, the dark clouds over RVH are not going anywhere as the hospital got back in news for something awful and inhumane again.

A video of an uncomfortable husband pleading with the authorities in front of RVH hospital is the new talk among Canadian netizens. The man in the famous video was not allowed to be with his pregnant wife’s side when in need. His wife was rushed to an emergency ultrasound to check fetal health.

The husband’s voice cracks midway while pleading with the authorities. His voice signs painfulness and further, the man didn’t show up any resistance but abided by what the securities said. The reason for not allowing the husband to be near his wife is appalling of all. This man never really cared a fig about the Wuhan virus and remained unvaccinated.

An unvaccinated man is denied hospital entry to be by his pregnant wife’s side for an emergency ultrasound to check fetal health in Barrie, Ontario.

What have we become? pic.twitter.com/4Ph3TCgdwh

The hospital system in Canada has been spiralling down with forced three shots making people sicker than before. The crisis has inflamed further after doctors and staff were cut short for not getting vaccinated.

Emergency rooms are crowded with no one at service. Adding further worries, comes Trudeau’s sweet poison of liberalism. It is time that we say it again that with this guy at the helm, Canada has simply lost its way.

Collection of 20 Upset and sad quotes and sayings