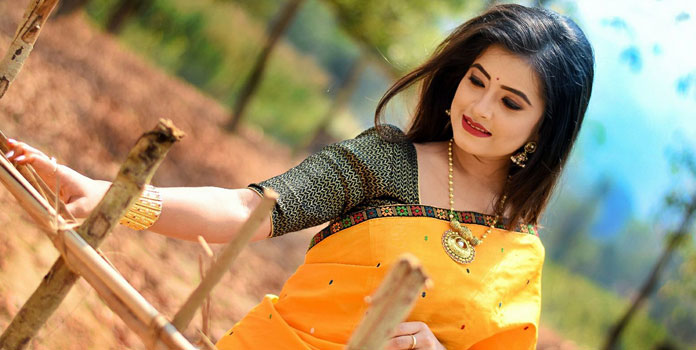 Deeplina Deka is one of the most popular actresses and singers in Assam. Deeplina holds an electrical engineering degree and is also known as “Pari” in Assam. In this article we are going to talk about the biography, career, notable works, films and family of Deeplina Deka so read the article till the end.

Deeplina Deka made her acting debut in the Assamese film Mission China directed by Zubeen Garg. Her song Chui Diyana has gained popularity among listeners in Assam.

She is very interested in the Bollywood industry and want to sing Hindi songs. We can hope for her Bollywood debut soon but before that let you know her a little better.

Deeplina Deka is very popular on social media sites she has over 900k followers on Instagram in 2022. Deeplina is very popular among new generations and becomes a matter of discussion frequently.

Since her studies, he has won awards for her participation in dance, music, and acting. Deeplina has trained in Kathak dance and mastered classical music. She also finished fourth in the 2007 National Badminton Championships. After graduating, she worked as an engineer for Airtel and Geo, where she starred in the film Mission China directed by Zubeen Garg.

She then quit her job and entered the film industry. Her first video album “Nuwari Nuwari” was released on 23 February 2015 with Tarun Tanmay. Her popularity has now spread to the entire North East, including Assam.

Deeplina Deka was born on 7 February she was born in 1930 to Babul Kumar Deka and Padmini Deka. Her father worked in the Nagaon Paper Mill. Deeplina is the youngest of the children and has an older sister.

She passed her secondary examination from Kendriya Vidyalaya Jagiroad and enrolled in Maharshi Vidya Niketan for a higher education.

At the Girijananda Chowdhury Institute of Management and Technology (GIMT), Guwahati, Deeplina studied Electrical Engineering. She participated often in the College’s singing, dance, and dramatics competitions. This gifted young lady also has a Visharad degree in classical music and is a qualified Kathak dancer.

She has not revealed who is her love of life yet. There is no information on any source about her relationship. As of now, we can say that she is single and focused on her career. She stays so cautiously that she is not even rumored with anyone.

Deeplina Deka is one of the most popular and loved celebrities in Assam. She will be reaching a million followers mark on Instagram soon. Her account can be reached at deeplina_deka. She shares her personal life as well as professional life on Instagram.

She is a fitness freak and loves playing badminton. Shreya Ghosal is her favorite singer and she admires her. She is very active on social media sites and has more than 5 lakh followers on Facbook.

We hope this biography article of Actress Deeplina Deka will be helpful for you to understand her journey and works.