Travel to any part of Canada and you are sure to find tales that show how brutal Justin Trudeau’s regime is. And now, among several other issues, one deserted church in the heart of Ottawa is the talk of the town. 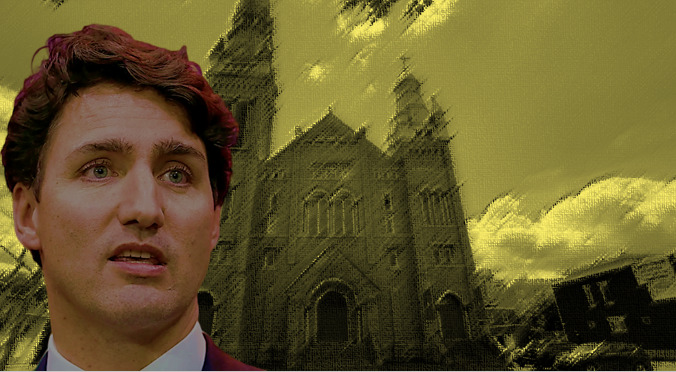 First, the facts. St. Brigid’s was a dilapidated church before Willem Comer and Tony Cuzzocrea tried reviving it. The United People of Canada (TUPOC) is the organization that is currently in the process of turning the church into a cultural hub of sorts. ​​Willem comers’ mission in life is to “foster and spread peace, love, and understanding,” and he believes Ottawa residents’ unease about the perceived relationship between his organization and the “Freedom Convoy” is “overblown.”

A Deserted Church gets limelight

As for Tony Cuzzocrea the following words reveal the type of man he is…“I thank God every single day. Being extremely poor made me feel for people that are suffering in any way, not just financially, but every which way. All my life I’ve spent trying to help people, I love people. And I love people from the heart.”

But there’s a rift going on between this organization and the locals. First, there was graffiti and posters against the organization. Now a fresh set of posters can be found around the locale, on that say that “St. Brigids belongs to our community not convoy.” Why would people in the neighborhood have a problem with an organization that is being led by people who talk of love, peace, dialogue, and culture? No one knows for sure. But TUPOC’s links with the freedom convoy and the fear of having new people (and thereby new ideologies) in the neighborhood are the popular answers.

The following statements by locals will help us understand their concerns…

“The problem is that there is so much conflicting information out there. Some people are saying that there’s no link to the ‘Freedom Convoy,’ and some posting clear links on social media. So, at this point, we’re in an information-gathering stage to see what’s going on here.”

We cannot rule out the fact that this entire rift between the locals and The United People of Canada may have been instigated by Radical liberals who were acting independently or on behalf of Trudeau’s regime.

The locals are predominantly Liberal, but even Liberals have become weary of Trudeau and his hollow policies. They have been crippled by the housing crisis, the inflation, the cruel Vaccination policy, and the airport crisis. Do they have the time to bother themselves with a peaceful commune trying to revive an old forgotten church?

It is possible that the first set of graffiti against TUPOC was painted by Trudeaus’ stooges to inflame the traditionally Liberal community around the area.

Ottawa is a liberal heartland. Trudeau has a grip over the populace in every nook and corner of the capital city. But the idea of once a deserted church turning into a cultural hub promoting open speech won’t sit well with the liberal champ. More people will be curious to dive into the space and considering the current crisis looming in the north American country, any sort of political discussion will end up pointing fingers at Justin Trudeau’s inefficiency.

When the locals did not take the bait, the police came into the picture. They evicted the members of the commune saying that “we’re enforcing a civil matter over nonpayment of rent.” Oh, and the sale of the church may not go through as well. The noose around TUPOC, a peaceful organization is being tightened as the world watches in horror. Every church is a commune of sorts. So are schools and homes. Will Trudeau stop with St. Brigids? We don’t think so. And we have evidence for it. Just refer to our previous articles or content by media that Trudeau can’t control. TUPOC’s suppression isn’t the first incident. We can’t tell which one it is because we have lost count

We know it’s only a theory but we’d say it’s an educated guess considering Trudeau knows he is finished and is willing to try anything to stay in power.