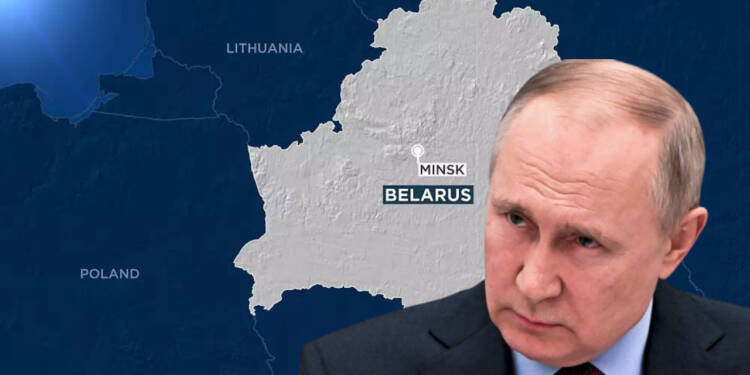 The Russians for sure like to do things in style and it looks like another major event is on the cards. Moscow’s “ Special Operation” in Ukraine has paralyzed the Zelensky regime, which is relying upon Western aid to prolong the conflict.

Factually speaking, the Russians have not yet exposed the Ukrainians with their real-time defense infrastructure because the Russian President Vladamir Putin had planned the operation in a way to avoid and minimize civilian suffering.

However, Ukraine’s leadership seems opposed to Putin’s idea of a low-scale war. A damaging attack at an airfield in Crimea that Ukraine reportedly launched has incited Putin and the result would indeed be dramatic and dreadful.

With Ukraine’s Independence Day approaching, officials of the Zelensky regime would have a difficult time sleeping.

Reports of a considerable Russian buildup along the Ukraine-Belarus border is the talk of the town. Ukrainian officials are concerned that Russian President Vladimir Putin will choose to intensify his attack on Ukraine during the country’s Independence Day holiday next week.

“We must definitely be prepared for possible missile strikes,” said Yuriy Ihnat, spokesperson for the Air Force Command of the Armed Forces of Ukraine, on Wednesday. He warned that Russia has a preference for using certain special dates for so-called “congratulations.”

Russia’s move to keep missiles at the Ziabrovka airfield, which is about 15 miles from the Ukrainian border in Belarus has further spiked tensions among the officers of the Ukrainian defense forces.

“The location of missile systems along the state border shared with the Republic of Belarus, in particular at the Ziabrovka airfield, triggers concern,”  Valeriy Zaluzhnyi, Ukraine’s Commander-in-Chief of the Armed Forces said in a Telegram post.

Now, Ziabrovka is controlled by Russian forces. The place is very significant for intelligence and strategic purposes for the Russians to lead aggression on the Ukrainian forces from the North.

Intelligence agencies indicate that the Russians are not only stockpiling weapon systems in the north but are also preparing for a deadly attack in the upcoming weeks.

Reports indicate that Moscow is planning for a big operation. Something unlike the operations of the past where Putin preferred to keep the attacks low in impact. In particular, Russia has been storing S-400 systems, advanced anti-aircraft weaponry, near the Ukraine-Belarus border, which is raising alarm about Russia’s next moves, according to Anton Geraschenko, an adviser to Ukraine’s Interior Ministry.

If it were not enough to make Zelensky worried, additional reports indicate that Belarus may also be preparing for an attack as well.

Belarusian leader Alexander Lukashenko has been brother in arms with Putin after Putin supported him after dissent built around the legitimacy of his 2020 election. Belarus has also been used by the Russian forces to launch attacks in the past given its south east border’s proximity to Kiev.

Tensions are rising with the approaching Ukrainian Independence day. It would be rather traumatic to witness the day turning into the modern doomsday, and for what?

The ambitions of one man- Volodymyr Zelensky, the clown President of Ukraine.