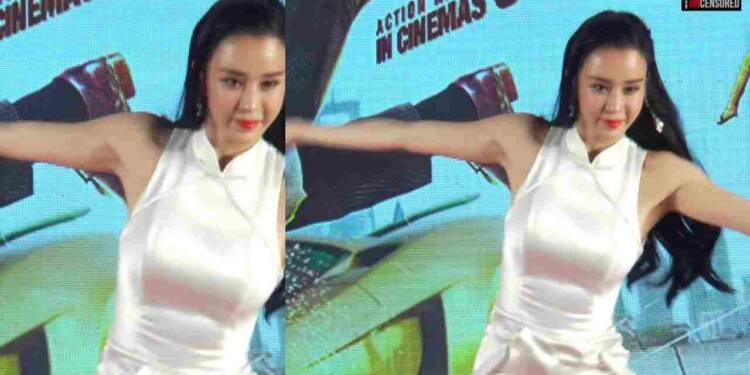 Miya Muqi is a Chinese actress and a popular yoga instructor who came to the limelight after she acted in the film Kung Fu Yoga. Her other popular films are Tomb Robber and The Monkey King 2. In this article we are going to talk about the biography, career, notable works, films and family of Actress Miya Muqi so read the article till the end.

She has recently hit the fame among Indian audience after her performance in Ram Gopal Verma’s Ladki: Enter the Girl Dragon in 2022. However, the film did not perform well still Mu got her shot in Indian cinema. In fact, she attended Kapil Sharma Show to promote Kung Fu Yoga.

Like Yeoh, martial arts actress Muqi performs all of her own stunts, but she acknowledges that she sometimes gets nervous, particularly while performing wire-flying performances that involve somersaults in mid-air.

Miya Muqi, a certified yoga instructor, started modeling when she was 14 years old. She made her acting debut in the Michael Tong-starring film Tomb Robber. As “the most gorgeous Asian Yoga Coach,” she received recognition. At the 2010 Tencent Auto Show, Miya received the “Favorite Lady” award.

She teaches yoga, dancing, and taekwondo in addition to these other disciplines. Miya came on The Kapil Sharma Show with Jackie Chan and other Kung Fu Yoga cast members to promote the film.

Apart from movies, she has also appeared on television. Legend of Heavenly Tear Phoenix Warriors (2017) and Daredevil Treasure Hunter (2018) are her television credits.

A personality who tries to demonstrate competence in yoga other than yogis will undoubtedly be disregarded, like Bipasha Basu and Shilpa Shetty. However, Miya Muqi managed to gain attention.

She is most recognized in China as the most attractive yoga instructor after releasing a pictorial about the practice and showcasing her skills on television.

But after becoming the Youngest Yoga Idol of China, she attained her greatest fame. She is regarded as the top yoga instructor in Asia and is well-liked there. Even a mobile yoga app called Muqi Miya Hot Yoga Teacher is available from her.

She is learning swordplay, getting ready to join the military, and learning more about military topics.

She looks up to Scarlett Johansson as an inspiration, and her two experiences with Jackie Chan taught her that in order to succeed as an action star, you must go “all out.”

She has a propensity to take up new sports when getting ready for a new film.

In China, Muqi Miya is a well-known model.

The Yunnan native started modeling at the age of 14.

After releasing a yoga pictorial and showcasing her yoga skills in a TV program.

She is dubbed among Chinese netizens as a well-known yoga instructor.

She is a skilled dancer and a Taekwondo master in addition to being a professional yoga instructor.

She received her advanced freediver certification from the Professional Association of Diving Instructors.

She is a member of the Yunnan province’s Yi ethnic group.

We hope this biography article of Actress Miya Muqi will be helpful for you to understand her journey and works.

Captions And quotes about liking someone: to show your crush