Namibia & Botswana team up to keep Western pirates away 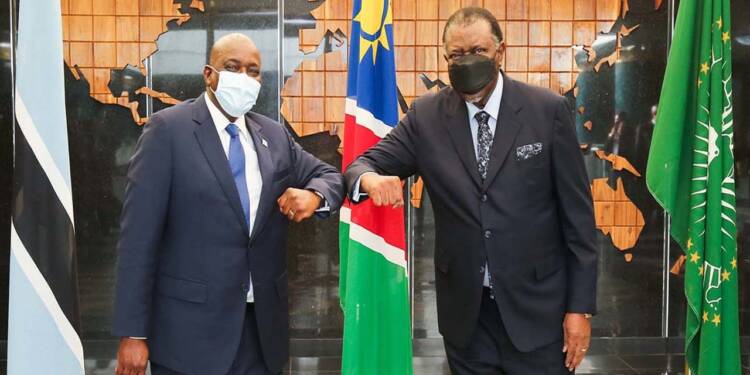 Botswana-Namibia bi-national commission: Namibia and Botswana, two African countries are lifting passport requirements for cross border movement of people. This is a first of its kind initiative in the sense that now; nationals of the two countries would only need to produce IDs to move between the two countries. This is a significant move in its attempt at realizing the ultimate goal of a strong, united and conflict free Africa, as it has the potential to be further extended to trade and other economic purposes.

Namibian President Hage Geingob said, “Our two countries not only share a common border, but also common people and heritage. Symbiotic and inter-dependent relationships exist along our common borders,” during the inaugural Botswana-Namibia bi-national commission.

He further called for fast-tracking the implementation of the usage of Identity-Documents (IDs) as travel documents between the two countries, without delay.

For a continent, so far plagued by conflict, terrorism, political instability this project is highly ambitious and if fructifies, is sure to usher in a new era of African Continental bonhomie, leading to economic self- sufficiency and less dependence on the west. Keeping in mind the enormity of this task, it’s natural to be viewed with cynicism. Cynics have raised concerns regarding militant groups such as Boko Haram and public health crises including Ebola as a big hurdle in its realization.

However, the fact that the leaders of these two nations have accepted one of the major continental challenges is indeed laudable. It is a stepping stone towards economic development; with open borders it will be easier for a landlocked country like Botswana to have access to the Namibian coastline, thereby increasing their revenue through trade. . Many researchers have argued that it is crucial for the landlocked economy to negotiate the domestic policies with its coastal neighbours in order to persuade them to agree to a lower degree of obstruction, making the landlocked economy less vulnerable to the caprices of its neighbours’ economies. Recently, it has been seen that several African countries without coastlines are embracing this growth model.

Earlier, countries in the SADC bloc lifted visa requirements, but the Botswana-Namibia deal has gone one step ahead and has also lifted the requirements of passport for the citizens of these two nations to move freely. This is  an unprecedented but a welcome change.

Aimed to foster intra-Africa trade, integration and socio-economic development, these two countries have shown the African Union, what exactly a Union of nations means.

With the abundance of natural resources African continent can become the richest continent in the world but infighting, instability and exploitation by the west hinder its development. Western neo-colonialism has used foreign trade as a tool for exploiting the vast resources of Africa at unfair terms even in this age.

Medium.com speaks about a journalist Mark Curtis’ report on ‘Britain’s scramble for Africa’s energy and mineral resource.’ where he talks about “how British companies  have mining operations in 37 sub-Saharan African countries, which control over $1 trillion worth of Africa’s most valuable resources”

It is a matter of shame for a modern world that in countries like Democratic Republic of Congo, children are forced to work in life-threatening conditions to mine cobalt that ends up in smartphones, cars and computers, by household brands including Apple, Microsoft and Vodafone, according to a new investigation by Amnesty International as reported by ‘The Guardian’.

This shows how the west has built its wealth by commercially subjugating and exploiting Africa in the guise of helping it to develop economically. However, there is still a glimmer of hope. If African leaders can finally come together and addresses the challenges that the African continent is facing, it may put an end to Africa’s commercial exploitation at the hands of the West that has always benefitted from divided and conflict-ridden Africa.

Namibia and Botswana have set an example for other African nations to come together and pave the way for a united, peaceful and prosperous Africa which has enormous potential to not only break free from the shackles of western neo-colonialism but also to be the new economic giant of the Global south.